For saving lives of children around the world, philanthropist and international food entrepreneur Yank Barry along with his wife, Yvette, will receive the Childhelp International Achievement Award on January 10, 2015.

Since co-founding the Global Village Champions Foundation in 1995 with Muhammad Ali, Yank Barry has become a world-renowned philanthropist on a mission to feed and the hungry and rescue those in dire need around the world.

Barry, along with wife Yvette, have spearheaded the nonprofit organization’s efforts to supply nearly one billion meals in the last two decades.

The Barrys don’t just supply money: They are on the front lines as the charity provides aid to countries in crisis. Most recently, Yank and Yvette Barry have been focused on saving refugees from Syria, Iraq and Iran.

To date, the couple has saved more than 1,200 Muslim and Christian refugees who have fled the violence, volatility and in many cases ISIS and provided them with a home, meals and anything else they needed to rebuild their lives. 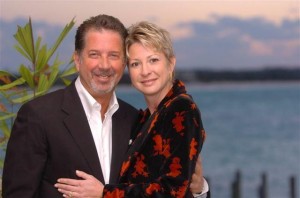 “Every moment of every day, Yank Barry puts his life in danger by going behind enemy lines to rescue children and their families from certain death,” says Sara O’Meara, Childhelp Chairman and CEO. “He has shepherded thousands to safety, secured a Nobel nod and shining a spotlight on his great work is just a small token of our admiration and respect for his lifesaving mission.”

For over 55 years, Childhelp and its founders, O’Meara and Yvonne Fedderson, have spearheaded efforts to eradicate child and family abuse throughout the United States, Canada, Guam and the U.S. Virgin Islands.

Yank Barry says although he may be front and center, the public should know that his wife has been with him.

The work by Yank Barry and Yvette Barry to help families all over the world has been featured on Reuters, CNN, Agence France France Presse, NBC News, Jerusalem Post, Globe and Mail (Canada) and many,many others.

About Global Village Champions Foundation: Started in 1995 by Yank Barry, Global Village Champions Foundation strives to become the undisputed world leader in private, humanitarian delivery of nutrition to needy persons across the globe, while sustaining human life and helping to eradicate hunger from the face of the Earth. With the help of donors and notable figures such as Muhammad Ali, Gary US Bonds, and Evander Holyfield, the nonprofit has provided nearly a billion meals to the hungry around the world.

To buy tickets to the Childhelp Drive the Dream Gala click here.