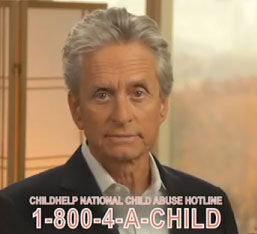 Michael Douglas is an American actor and producer, primarily in movies and television. He has won three Golden Globes and two Academy Awards; as producer of 1975’s Best Picture, One Flew Over the Cuckoo’s Nest, and as Best Actor in 1987 for his role in Wall Street. Douglas received the AFI Life Achievement Award in 2009. He is the eldest son to actor Kirk Douglas. Michael is currently working on Behind the Candelabra, a feature film about the life of celebrated pianist, Liberace.

Michael Douglas filmed a PSA for the Childhelp National Child Abuse Hotline, as well as for the Childhelp’s 2nd annual Celebrity Golf Invitational in 2012. The Douglas Family Foundation has been a generous supporter to Childhelp and has helped raise funds and awareness for the precious children we serve.