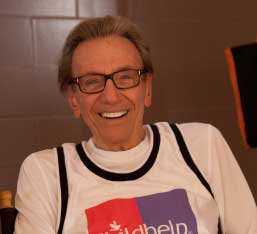 Norm Crosby’s comedic style earned him the esteemed comedy title, “The Master of Malaprop,” as well as a star on Hollywood’s Walk of Fame. Norm’s television and film career include appearances in Cougar Club, Farce of the Penguins, Eight Crazy Nights, Diagnosis Murder, Roseanne, L.A. Law, The Love Boat, The Tonight Show with Johnny Carson, Adam-12 along with numerous others. Since 1983, and for many years following, Norm co-hosted Jerry Lewis’s MDA Labor Day telethon.

He has visited both Childhelp Villages in California and Virginia, and has been the featured entertainer at numerous Childhelp events over the years. Most recently, Norm participated in a national PSA for Childhelp starring Betty White, Shaquille O’Neal, Buckcherry, Ron Masak, Anne Jeffreys and Childhelp founders Sara O’Meara and Yvonne Fedderson. Norm is always willing to go above and beyond for the precious children we serve!