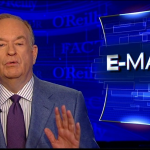 Fox News Channel personality Bill O’Reilly, host of The O’Reilly Factor, mentioned his long-time support of Childhelp on the Tuesday, March 17 broadcast of the show. The O’Reilly Factor is the most watched cable news program on American television.

O’Reilly has been a recipient of the Positive Impact in Media Award at Childhelp’s Drive the Dream Gala in Scottsdale, Arizona. He consistently supports Childhelp’s programs and often mentions the organization’s National Hotline on air. Childhelp co-founders Sara O’Meara and Yvonne Fedderson also have been guests on his show.

“When a child at risk hears about our organization through a trusted source like Bill O’Reilly it may be the push for that young person to Google Childhelp, call our Childhelp National Child Abuse Hotline and get emergency intervention anywhere in the country. We’ve seen a mention move a heart to give but we’ve also seen a mention save a life.”

“Bill has done so much to draw attention to at-risk children, supported Childhelp through his charitable foundation and never fails to raise awareness. We are so fortunate to have him on our team!”

In addition to his role as a television host, O’Reilly’s a syndicated columnist, author and political commentator. He’s written 10 books, including Killing Kennedy, and a personal memoir entitled, A Bold Fresh Piece of Humanity.