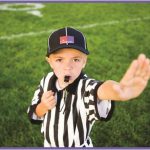 “Boys will be boys.” I’ve said it. You’ve said it. It is globally understood to reference something an adolescent male does which is goofy or frowned upon, but not really appalling or legally wrong. However, that phrase becomes murkier when you apply it to sports.

Is it just “boys being boys” when you call someone a “wuss” if they didn’t catch a pass because they were afraid of the middle linebacker? What about telling a less physically imposing or less masculine teammate they are acting like a “pansy.” How about telling a teammate you’d want to engage in sexual acts with their sister or mother, or in fact, they call into question your own personal sexuality?

Lastly, it is just “boys being boys” when you make an off-color comment about someone’s race because they went to an elite university? Most would argue no but some would counter and say it is okay in a locker room or on the sports field because it’s “how guys talk.” Former NFL players say it’s the sports culture and it builds bonds between teammates. But what happens when it doesn’t build a bond, but tears them down? The line between joking around with teammates and bullying should be apparent. Sadly, it’s not. What you say on the field does matter. When a player must turn to therapy or treatment to deal with antagonizing teammates, something is wrong.

Jonathan Martin, a black 6’6, 300 pound 2nd round draft pick out of Stanford University, was, according to a New York Times article, “humiliated by the persistent abuse leveled by [teammate Richie] Incognito, who is white and was identified as the primary instigator of the taunting” as early as 2012, the year he was drafted.

In February of 2014, Ted Wells, a prominent defense attorney hired to investigate the alleged bullying case against offensive lineman Martin, released his 144 page report. It detailed “a classic case of bullying, where persons who are in a position of power harass the less powerful.” The report sent shock waves through the organization and NFL. Was this just a case of “boys will be boys?”

“I have made it clear to everyone within our organization that this situation must never happen again,” Miami Dolphins owner, Stephen Ross, said in a statement released by the team. He added, “We are committed to address this issue forcefully and to take a leadership role in establishing a standard that will be a benchmark in all of sports.” While it’s a step in the right direction there’s one issue which probably did not get as much attention as it should. Wells’ report detailed how “Martin’s teammates did not intend to drive him from the team or cause him lasting emotional injury.”

And what about “girls will be girls”? Women’s athletics are just as susceptible to peer bullying, unattended physical injury on the field and sexual harassment by authority figures of trust.

This brings us to the larger issue of players, boys and girls of all ages, not knowing when they have crossed the line. Team sports are great unifying activities in most cultures. They bring young kids out of their shells, teach them discipline, enhance creative thinking, introduce them to people from all walks of life, build self-esteem and demonstrate how to work in a team setting—all in the name of something fun and healthy. What happens when they hear professional players on local sports talk radio saying that bullying is not a big deal because it’s just sports culture? If players in college see that bullying is okay in the big leagues, what prevents this type of abuse from trickling down into high school, middle school or even little league sports?

Some might not think bullying is a big deal. They may even want to bury their heads in the sand calling it “tough love” instead of bullying when it comes from coaches or decry that we are “raising a nation of wimps if they can’t take a little heat on the field” when it comes from peers. The truth is, bullying gets in the way of essential life skills and bullying tactics don’t help build better futures. When was the last time a business professional got ahead by leveling a punch in the boardroom, routinely verbally abusing a superior, or harassing staff on the Internet? These tactics deeply injure the victims and will eventually even hurt the bully. Whether you’re wearing pads or not, bullying hurts all the same. Jonathan Martin, along with countless other, can attest to that.

According to Childhelp Speak Up Be Safe for Athletes “Blow the Whistle on Child Abuse”:

If we create a culture where kids look up to professional athletes’ who are dismissive about bullying, it can have overarching consequences not just for the pros, but on human lives. According to the Center for Disease Control, while bullying does not directly cause suicide and “most youth who are involved in bullying do NOT engage in suicide-related behavior,” those at both ends of frequent bullying “are at increased risk for suicide-related behavior.”

In a study by Yale University in 2008, they “analyzed 37 studies that examined bullying and suicide among children and adolescents.” All 37 found links between being bullied and having suicide-related thoughts. Five of the studies reported bullied kids were “two to nine times more likely to report suicidal thoughts than other children were.” Childhelp’s ‘Speak Up Be Safe for Athletes’ “Blow the Whistle on Child Abuse” underwritten by Olympic consultants the Foundation for Global Sports Development, strives to combat abuse in youth athletics by educating coaches, parents and community members about the signs and symptoms of child abuse while also teaching children ways to protect themselves against predators.

Hundreds of thousands of kids each year are affected by bullying. A prime way to halt this potentially damaging behavior is to teach athletes across all grade levels to speak up against bullying in sports and to be safe as they seek to reach their ultimate potentials. The program encourages us all to become referees on and off the field. R.E.F. stands for Report, Educate and Fight. Report all instances of bullying, educate coaches/teachers/parents/children about abuse in youth sports and fight for tougher laws to protect children. It is the only prevention education program of its kind bolstered by a 24 hour, 7 day a week hotline staffed with professional crisis counselors (1-800-4-A-CHILD) and it is simple to implement. The program offers kinesthetic learning for kids so that important safety information is embedded as they move and play. A quick, fun pre-game workout is all the time it takes to teach body safety, emotional boundaries and good sportsmanship.

Instead of letting the dated message “boys will be boys” excuse bad behavior in youth athletics, it’s time to create a culture where boys and girls are nurtured in their sport, protected as they play and encouraged to dream big.

It’s time to blow the whistle on bullying.

For more information, please see Childhelp’s Speak Up, Be Safe for Athletes at: www.childhelp.org/speak-up-be-safe-for-athletes/