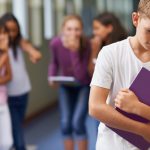 A young boy being bullied at school

Ben, a usually happy 4th grader, came home from school one afternoon, threw his backpack on the floor and slumped on the couch. When his mom asked how his day was, he cried, “This was the worst day of my life!”

It began just before lunch when an older kid at school shoved him into the lockers, demanding his lunch money. When Ben refused to hand over his $2, the bully continued torturing him, calling him names, throwing books at him and verbally abusing Ben all afternoon until he ran to the nurse’s office in tears seeking protection.

Bullying has been going on for centuries

When we think of bullying, we picture kids being pushed around on the playground or teased in the hallways at school. Too often, adults dismiss these confrontations as “kids being kids,” but the act of intimidation isn’t typical childhood behavior, and it is not a childhood “rite of passage.” Aggressive conduct whether it’s physical, verbal, or online has dire consequences – for both the victim and the bully.

Phoebe Prince suffered months of bullying by her classmates, and after persistent taunting and harassment, she took her life by hanging herself in the stairwell of her family’s second-floor apartment.

Michael Brewer, 15, was attacked by three teens that poured alcohol on him and set him on fire.

Bullying ranges from Ben’s “bad day” to incidences that can have lifelong traumatic effects or even take a life. This is why it is essential to get in front of smaller episodes to avoid potentially dire consequences.

Do you ever wonder what goes on in the mind of a bully?

While most parents can’t imagine their child is mistreating or bullying another child, 1 out of 5 kids in grades 6-10 admits to enacting some form of “bullying” against their classmates (Nansel, et al., 2001).

According to a survey commissioned by Care.com, “bullying and cyberbullying have eclipsed kidnapping as parents’ greatest fear. Nearly one in three parents of children ages 12-17 agree that bullying is a more serious concern than other dangers, including domestic terrorism, car accidents, and suicide.”
Children inherently know that bullying is wrong, which is why they do it when parents are not around. It’s also the reason cyberbullying has become common practice – parents are more unaware of what children are doing online than they like to admit.

Kids that bully other kids typically exhibit delinquent behavior, dislike school, show a lack of empathy for people and animals and may show signs of low self-esteem and narcissistic behavior.
Other signs your child could be a bully:

The amount of bullying hasn’t gotten worse over time, but extreme behavior has. It also gets much more media attention these days. Parents have more influence on their children than they know. It is essential to raise children to be kind and understanding.

What about Ben’s bad day? Ben’s mom reached out to the school. It turned out they had implemented Childhelp Speak Up Be Safe prevention education and were well versed on anti-bullying policies. They reprimanded the bully and worked with his parents to educate the family on the dangers of bullying. If a school does not have a strong prevention education program, parents should contact law enforcement to ensure their children are safe.

Ben’s bad day turned into a great day because not only was his family responsible for stopping a school bully, he also learned that he has a right to be secure in his skin. That’s a lesson that lasts a lifetime!

If you have concerns that your child may be a bully, or may be the victim of bullying, the Childhelp National Child Abuse Hotline, 1-800-4-A-Child (1-800-422-4453) is available 24/7/365. Please call and talk with a licensed counselor about our bullying prevention resources.

Prev
How Important is Thanksgiving Soup to a Child...
Next
Tip-or-Treat: Childhelp’s Tips for a Safe H...