Calvin Coolidge: A Portrait in Fatherhood 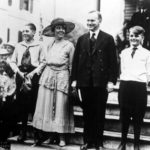 In 1924, Calvin Coolidge — renowned as a president of few words — exhorted Americans to celebrate Father’s Day to “establish more intimate relations between fathers and their children and to impress upon fathers the measure of their obligations.”

Coolidge wasn’t the first to stand behind the fatherly response to the already wildly popular Mother’s Day. Woodrow Wilson had voiced support to make a federal holiday of it eight years earlier, and Congress had considered a bill to recognize Father’s Day as early as 1913.

Nevertheless, Coolidge’s words over Father’s Day stand as a testament to early hopes for the celebration, even amid contemporary criticism that the day would devolve into an excuse to sell suits, ties, tools and haberdashery — a criticism still held today.

The holiday, now observed on the third Sunday of June, wouldn’t officially be recognized until 1972. Nonetheless, Coolidge’s sentiment persevered through the decades and through countless Father’s Day hardware sales and menswear blowouts.

Father’s Day stands as a day to celebrate the love shared between fathers and their children, and it is a day to honor the responsibilities assumed by anyone who anyone calls Dad.

Coolidge was well-aware of the importance of the bond between father and child when he issued his 1924 proclamation. His mother was lost to disease when the president-to-be was only 12, and his father, John Coolidge, wouldn’t remarry for another seven years.

Coolidge’s teenage years were spent in a single-parent household where thrift and discipline were prioritized in true New England fashion. In his autobiography, Calvin lauded his father’s support and expressed great admiration for the man who showed talent and tenacity in endeavors ranging from farming to business to politics. But John undertook few efforts with quite as much pride as his roles as father, father-in-law and grandfather.

In the early morning after President Harding’s death in 1923, it wasn’t a Supreme Court Justice, but John Calvin Coolidge Sr. who delivered the oath of office to America’s 30th president. It has been described as the most unique presidential inauguration in history.

By the time he assumed the presidency, Coolidge was the father of two teenage boys himself, John and Calvin Jr. By all accounts, Coolidge’s role as the leader of the United States did not distract from the “measure of [his] obligations” as a father

What Coolidge couldn’t have known when he extolled the importance of honoring fathers during his Father’s Day proclamation that spring of 1924 was that later in the summer tragedy would strike.

His two boys, John and Calvin Jr., played a tennis match on the White House grounds, with Calvin Jr. wearing shoes with no socks. The choice left a blistered toe on the youngest son’s right foot that would soon become infected. That infection, untreated by a yet-to-be-invented antibiotic, would spread and claim the life of the 16-year-old boy.

In 1992, John recalled the loss in an interview with Life magazine, “Though father was tenderhearted, he rarely showed his feelings. But when they were taking my brother’s casket from the White House after the services, my father broke down and wept momentarily. Calvin was my father’s favorite. It hurt him terribly. It hurt us all.”

The brokenhearted president also had no way to know that only two years later, the health of his father would decline too. Though Coolidge tried in haste to see his father for a final farewell after hearing he’d taken ill, the president could not make it to Vermont in time.

“It costs a great deal to be President,” he wrote of that day.

Coolidge was known for his reticence and careful choice of words. So much so that he was given the endearing nickname “Silent Cal.”

“The words of a President have an enormous weight,” explained President Coolidge, “and ought not to be used indiscriminately.”

For Father’s Day, while Calvin Coolidge cannot lay claim to devising the observance, nor to popularizing it, nor to gaining its recognition as a national holiday … we can find some guidance in his articulation of its aims to “establish more intimate relations between fathers and their children and to impress upon fathers the measure of their obligations.”

As much as Father’s Day is for spouses and children to honor the dads in their life, Father’s Day is also a time for fathers to rededicate themselves to the duties of being dad. To work a little harder, but mostly love a little more. Happy Father’s Day.

Prev
Can Kids in California Get Ahead?
Next
Sandra’s Story