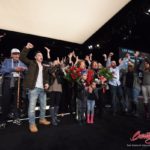 The Childhelp team on the auction stage at Barrett-Jackson Westworld in Scottsdale, Arizona. (Credit Twitter.com/barrett_jackson)

Now, this is what we call driving dreams!

On Thursday evening, January 19, a beautiful 1970-1/2 Chevrolet Camaro Z/28 arrived on auction stage at the 2017 Barrett-Jackson Auction in Scottsdale, Arizona. Moments later, it crossed the block, with a final bid of $130,000. Thanks to our treasured partnership with Barrett-Jackson, the entire amount will go towards Childhelp’s lifesaving programs.

“Generous and caring hearts like that of Patrick McGroder and Craig Jackson are what made Barrett-Jackson Scottsdale 2017 so magical for Childhelp and the children we serve. $130,000 will go a long way toward bringing healing care to children victimized and at-risk of child abuse.”

If you have a question about abuse or wish to learn more, please visit Childhelp.org or call the Childhelp National Child Abuse Hotline (1-800-4-A-CHILD) to speak with one of our certified crisis counselors.