Since 1959, Childhelp has helped children impacted by violence. With a mission to meet the needs of abused, neglected and at-risk children, Childhelp programs and services have improved more than 11 million lives with the help of volunteers and donors nationwide. With ongoing effort and help, Childhelp will reach even more.

Childhelp residential programs, advocacy centers and foster family and adoption programs uplift survivors in unique and powerful ways while the Childhelp National Child Abuse Hotline (1-800-4-A-CHILD) and Childhelp Speak Up Be Safe prevention education curriculum nurture communities nationwide to speak up for children and empower young people to find help when they are hurt.

But Childhelp’s efforts do not stop there.

Advocacy in Action: a Timeline

Abuse prevention relies on systems of care and leadership priorities that put the most vulnerable first. Safe children count on communities to protect them and count on strong laws to keep them safe. Childhelp strives to support the voices of children and act on their behalf for change.

1979 was the International Year of the Child. That year, the volunteers, donors and staff of Children’s Village USA, later Childhelp, celebrated 20 years working for the benefit of children. Childhelp founders Sara O’Meara and Yvonne Fedderson and others called on Jimmy Carter to set aside a Child Abuse Prevention Month to draw the national spotlight on an issue that remained in the shadows.

In 1983, with continued prompting by child abuse prevention advocates including Children’s Village USA, President Ronald Reagan set aside that April and every April thereafter as “National Child Abuse Prevention Month.”

Through the 1980s, Childhelp continued to draw the issue of child abuse out of the shadows and bring survivors closer to the help they needed. Soon after presenting the first national television special on the issue, A Time for Love, the organization established 1-800-4-A-CHILD. This first national toll-free hotline to address child abuse accompanied a launch of a national campaign against child abuse, including a widely distributed brochure on recognizing and reporting child abuse and another television event in 1984, Will We Hear Their Cry? 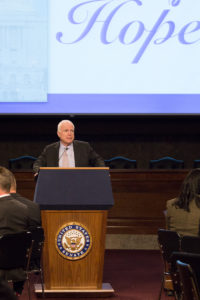 In this time, Childhelp and its founders were recognized as leaders in the field, receiving awards from the U.S. Department of Health and Human Services, the Department of Justice and Charity Awards International.

By the 1990s, the Childhelp Village in Beaumont was already renowned for its efficacy, and a sister facility opened in Lignum, VA, supported by chapters in neighboring areas, including Washington DC. More facilities would open nationwide to serve children in need. At the same time, Childhelp continued its advocacy for children on the national stage, adding their voice to thousands at the 1996 Stand for Children rally in DC.

In 2000, Childhelp was poised to call upon Congress to recognize the first Wednesday in April as the Childhelp National Day of Hope, a day reserved to observe a moment of silence in remembrance of the children who die every day from abuse and neglect and recommit efforts for children. 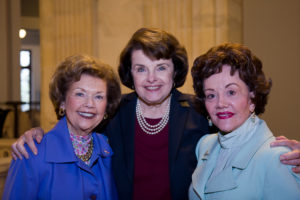 A bill in recognition of the day passed both houses unanimously.

More importantly that year, Childhelp advocated for legislation to establish a national registry of child abusers that would follow perpetrators from state to state. While the legislation was enacted by Pres. George Bush in the Adam Walsh Child Protection and Safety Act of 2006, the registry faced judicial and administrative stumbling blocks since becoming law.

In 2009, its 50th anniversary year, Childhelp sponsored a national “End Child Abuse Now” bus tour. The organization and its founders were recognized at the 17th National Conference on Child Abuse and Neglect and traveled state to state to gather the signatures of every governor on the Childhelp Governors’ Resolution to Eradicate Child Abuse.

The U.S. Department of Education awarded Childhelp with a grant in 2011 to revamp its prevention education program, “Good Touch, Bad Touch,” with the help of Arizona State University, to shape what is now “Childhelp Speak Up Be Safe.“

In its 35th year, the Childhelp National Child Abuse Hotline joined the National Hotline Consortium to share best practices, protocol and information with other hotlines nationwide. In 2018, it would pilot text and online chat services before rolling them out nationwide with the help of an innovation grant from the Department of Health and Human Services.

In 2019, the U.S. Department of Defense Education Activity chose Childhelp Speak Up Be Safe as their child abuse prevention education curriculum, providing tens of thousands of children with the potentially life-saving instruction.

In its sixth decade, Childhelp continues leading the way for safe children, harmonious homes and communities that care. By helping Childhelp prevent abuse and meet the needs of children who have been maltreated, donors and volunteers nurture a new generation of children who are safer. Together we help survivors heal … for the love of a child.

Prev
Child sexual abuse survivors focus on healing...
Next
Managing Your Child’s Diabetes in the Heat ...