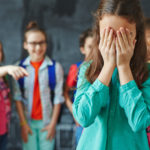 It’s no secret that bullying has harmful effects on our country’s youth, with plenty of research showing the psychological and physical impact children suffer when bullied. Up till now, though, there was little research done on the academic impact bullying has on children in grades K-12 education.

Published in the most recent Journal of Educational Psychology, researchers followed 383 children in public schools throughout Illinois (when the study began in 1992). This was the “first long-term study to track children for more than a decade from kindergarten through high school and analyze connections between bullying and academic achievement,” according to Gary Ladd, PhD, at Arizona State University who led the study.

What they found was significant — though not surprising.

First, about a quarter of all students are chronically bullied in school — a number that is similar to other studies. This leads them to have “lower academic achievement, a greater dislike of school and less confidence in their academic abilities.” For students who were moderately bullied but then saw the bullying increase over time (18 percent of students), the effects towards a child’s education were the same as those chronically bullied.

The study also found an inverse reaction. Those who were bullied less frequently (26 percent) had better academic success and showed similar results to those who were never bullied at all (32 percent of students in the study). The researchers noted that this leads them to believe that if bullying goes away, children are able to bounce back and improve their academic performance over time.

The research also suggests that as students stay in school longer, the bullying will subside, which is good news to Ladd.

“The good news is that it goes down. The longer kids stay in school, the less likely it is that they will be victimized,” Ladd told CNN. “Some kids are able to escape victimization, and it looks like their school engagement and achievement does tend to recover. That’s a very hopeful message.”

The researchers do believe schools need to prioritize anti-bully programs “and parents should ask their children if they are being bullied or excluded at school.” Most children won’t want to talk about it but they need to.

Additionally, Ladd says he’s worried most about boys and girls who are “more sensitive to bullying” and won’t have their claims of bullying taken seriously.

“Frequently, kids who are being victimized or abused by other kids don’t want to talk about it,” he said. “I worry most about sensitive kids who are not being taken seriously and who suffer in silence. They are being told…that this is just part of growing up.”

Overall, he believes more people acknowledge and are aware of bullying, but we still have more to do to protect vulnerable children.

“There has been a lot of consciousness raising and stories of children being bullied and committing suicide, and that has raised public concern. But more needs to be done to ensure that children aren’t bullied, especially for kids who suffer in silence from chronic bullying throughout their school years.”

You can read the entire study here.

Prev
Child Maltreatment: 2017 Report
Next
How parents should talk to their kids about a...