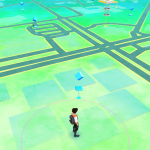 The latest installment of the 20-year-old Pokémon franchise brings those little pocket monsters onto any smart phone and into your neighborhood.

Pokémon Go uses ‘augmented reality’ and geodata to capture the spirit of the pocket monster collecting franchise in a way previously impossible. Players — ‘trainers’ in Pokémon — search for fictitious monsters in the world around them with a free, downloadable app that lets the trainer use GPS data, real-world imagery and ever-trusty Pokéballs to capture as many of the creatures possible.

To undertake their hunt, trainers travel to Pokéstops for Pokéballs and other goodies, and at higher levels to Pokégyms, pitting their best against other trainers to control the location and ultimately win better Pokémon. Combining GPS, photo and cell phone technologies with a well-established blockbuster entertainment franchise has meant a record-breaking 7.5 million downloads for the game. It’s brought kids out of the house and into their neighborhoods, and it’s brought together Pokémon fans of all ages.

On the flipside, there are some safety concerns with the game’s dynamic, which brings players to places they might not otherwise venture to without parents. The game directs children to shops, parks, art and landmarks in the nearby area as Pokéstops and Pokégyms. While vetting of these locations is reportedly not perfect, most are very visible and very public. Nevertheless, there is an interactive, geo-social element that other smart phone games may not necessarily have.

For a concerned parent, it’s easy to see the temptation for a child, hot on the trail of a rare Pokémon, to enter a stranger’s house or backyard, or another unsafe space. Luckily, a trainer can usually accomplish their aim without setting foot inside any building. Nevertheless, a new kind of game can raise new fears, and it illustrates the importance of knowing what your child is doing, where your child is and having a set of age-appropriate expectations before your child leaves the house, with or without you. These limits don’t have to look much different than normal neighborhood safety rules and can include:

As a parent of an avid trainer (who just caught my own Eevee Pokémon floating between paragraphs three and four), you’ll have to forgive the effort not to gush a bit about the game. It’s fun though, to jaunt through the neighborhood with your child (or by yourself). It’s an excuse for a little fresh air, family bonding and getting to know your neighborhood all at once. In my book, that makes this a game that was born to be a winner, as long as everyone stays safe.