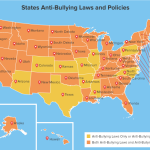 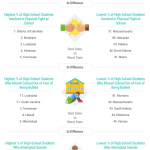 Bullying is no secret to children. And if there is one thing we can agree on, it conjures grave and long-lasting consequences. According to National Voices for Equality Education and Englightenment (NVEEE), a child is bullied every seven minutes.

This bears repeating: Every. Seven. Minutes.

Other important statistics identify nearly 30 percent of middle school through high school aged students are victims of bullying, and over 70 percent of young people witness bullying in their schools.

The dangers are disturbing. According to PACER’s National Bullying Prevention Center and StopBullying.gov, students who experience bullying are at an increased risk for:

However, the effects aren’t just on those who are bullied. Individuals who do the bullying are also at a higher risk to:

How the States are Ranked

WalletHub took data from multiple data sets including the U.S. Census Bureau, Centers for Disease Control and Prevention, and a handful of other sources to compile a national ranking of which states have the worst problem of bullying in the United States.

The most egregious offender? Michigan.

WalletHub  also interviewed 14 experts (you can view all of them here), who offered their perspectives regarding this data.

While there may not be a direct end in sight, between grades 6 and 12, parents can play a big role in interrupting the course of this type of torment and theseintimidation tactics by teaching children to be open-minded, and promoting non-violence, tolerance, and an overall good-natured lifestyle.

Parents can focus on these topics when talking to children:

• Stand up for other kids
• Talk to teachers, parents, other trusted adults about any problems
• Use the buddy system
• Become a school advocate

Making sure your children know you love them and creating a positive home atmosphere where they feel welcomed, confident, and understood will go a long way to boosting their self-esteem and decreasing the likelihood they become bullies.

Children who understand why bullying is wrong can be a frontline of defense against bullies in school, at the playground and online. It starts by standing up for peers and living the positive values taught by parents to create national change. Parents, kids, and communities combating bulling are modern-day superheroes!

If you would like to bring Childhelp’s anti-bullying and child abuse prevention curriculum to your school, click here to learn about Childhelp Speak Up Be Safe and it’s lifesaving potential.