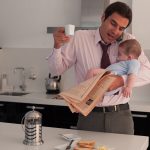 As many women advance in the workplace, some families have reversed gender stereotypes and stay-at-home dads are taking on daily household and childcare responsibilities. Like mothers who have experienced the joys and challenges of this essential job, fathers are learning about the considerable stressors that come with these responsibilities. Researchers set out to “examine the effects of fathers’ parenting stress during toddlerhood on children’s language and cognitive outcomes when children are 3 years old.”

What they found was substantial.

Children’s learning and cognitive abilities were affected when their fathers were stressed out about parenting. Some experts deduce that as a father feels more and more stress, he becomes distracted, thus not closely watching his child.

“The study, of more than 730 families, found that when fathers had high levels of ‘parenting stress,’ their sons tended to have poorer language skills at age 3. And both boys and girls typically scored lower on tests of cognition — which refers to abilities such as paying attention, learning and reasoning,” News 9 writes.

This study was conducted by giving fathers questionnaires and asking if certain parenting duties applied to them such as, “I feel trapped by my responsibilities” or “sometimes my child doesn’t like me.”

The key question for fathers is one mothers have been asking for years, “How do I balance the day-to-day stress of working in the home with the important job of raising my child to be healthy and happy?”

Having men involved in daily childcare allows children to be closer to their dads and creates a bond that normally might not be as strong.

Mothers and their children will most often have a maternal bond, but giving fathers a chance to nurture children and instill in them qualities and values complimentary to their mother’s abilities could offer children varied perspectives as they develop.

Some experts even say a father figure can lead his child to be more adventurous.

“Times have changed. More fathers are staying at home with their kids, or becoming more involved in parenting,” the lead researcher Tamesha Harewood writes.

While there’s no concrete cause and effect linking parental stress and a child’s development, this is an area researchers continue to monitor in an ever changing world. We always knew a father’s role is essential in shaping a child’s life and more times than not it will turn out to be beneficial to a son or daughter’s upbringing.

To show how important a father is in his child’s life, consider these Father Facts:

These are the statistical benefits of fatherhood but keep in mind that any household filled with love, attention, education and a caring support system will contribute to a thriving child.

Researchers and doctors want dads to know that as they navigate the role of primary caretaker, they are not alone and there are resources to lean on in stressful situations.

Dr. Michael Yogman, chair of the American Academy of Pediatrics’ Committee on Psychosocial Aspects of Child and Family Health says, ‘The first few years of raising a child can be particularly challenging. If you need help dealing with stress or depression, don’t suffer in silence.’

The Childhelp National Child Abuse hotline (1-800-4-A-CHILD) is available to both moms and dads who are in need of someone to talk to. The hotline is staffed 24 hours a day, 7 days a week with professional crisis counselors who can provide assistance, offer crisis intervention, information and referrals for a variety of situations. All calls are confidential.

In much the way we’ve been advocating for moms all these years, Childhelp wants dads to know that their contributions are extremely valued, their stressors are real and our support is limitless! When we work together, we build stronger families for the love of a child.

Prev
How Parents Can Use Time-Out Effectively
Next
The one video you have to watch to understand...