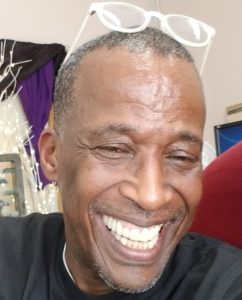 “This is not a job,” says Childhelp Family Clinical Coordinator Renandez Grim, “When you love what you do, you never have a day of work!”

Team members at the Childhelp Foster Family and Adoption Agency call him Grim. He gets up around 3am, says his prayers, makes coffee, watches a few shows, and comes into the office centered and ready to begin his advocacy for children. While there is a lot of documentation, reports and reviews, for Grim, it’s all about building relationships and inhabiting the spaces of the children he serves.

Grim describes his process, “I spend a lot of time at the house. After you’re there for a while, people let their guards down and you start to see what really happens. I may be just talking to a child or parent, but I’m watching out for who calls, who drops by. I want to learn all I can about a child’s environment.”

Foster Families receive training and standardized policy sheets but there is a big difference between reading the rules and regulations and living up to that important responsibly.

“I try to make that paper become flesh; make it come alive,” says Grim, “I have to be proactive in seeing what is often missed and knowing the language of the system. My job is to observe but also to teach, communicate and build trust.”

‘I try to make that paper become flesh; make it come alive’

Grim is an interpreter. His Master’s in Marriage and Family Therapy gave him the clinical tools he needed to launch a career in residential settings, group homes, as a program director and a pastor, but he has some extra experience on his resume that he doesn’t always talk about. He decodes nonverbal communication and uses his own childhood experiences to see beneath the surface: Is someone not being open? Is a child hiding something?

“I remember when the social workers would come to Mrs. Grim’s house to check on me. She would really put on a show: pull out the fancy bedspread, the nice carpet, the good drapes and make everything look perfect from the outside for the monthly inspection,” Grim remembers, “When they left, everything went back to normal.”

Normal wasn’t normal at all. An aunt by marriage, his foster mother, Mrs. Grim, was unloving, uncaring and disconnected emotionally. While many use the phrase “cutting the apron strings” as an analogy for growing up, Grim’s foster mother tried to hang the young boy with hers, both literally and figuratively.

“I started out as a disinhibited child,” Grim shares, being able to analyze himself all these years later, “It’s what we call the kind of kid who just runs up and hugs on people. My mom was from the rural south where a pregnant teenager wasn’t supposed to bring shame to the family by having a baby. Mrs. Grim said she’d take me in if I was a boy. I didn’t know I wasn’t her son until she told me in a moment of anger. That’s the first time I got a label: Foster Kid.”

The disinhibited little boy that showed easy trust and love became an angry kid. He lived in three homes where he built walls around himself for protection, emotional security and defense against abuse. Years later, he learned his mother had come back for him, but Mrs. Grim ran her off.

“I don’t remember getting hugs, kisses, and never got told I was loved. Only before she died did she apologize for how she treated me,” he said, “I understand those walls that our kids have. Every child is given a genuine self and then grows into the person society makes of us. That kid in the corner who won’t trust anyone? I know him. I was him. At Childhelp, we work to break down those barriers.”

‘That kid in the corner who won’t trust anyone? I know him. I was him. At Childhelp, we work to break down those barriers.’

Grim can detect when the balances are off in a household, when biological children are being favored or a child has been coached not to speak. He wants the true kid to come out; the true parent to come out.

What the Enemy intends for evil, God will use for good

He notes that when you’re a little kid in the system, everyone asks you what you want to be when you grow up…until you age out, and then you’re asked, “Where are you going to live?”

Grim originally wanted to be a doctor. His heroes were on TV shows like Marcus Welby MD, or later on, Chicago Med, “I had this intuitiveness to fix stuff. Maybe I wanted to save others because nobody saved me.” Judging from the little girl who texted him on Christmas just to check in, he is giving children who need a caring heart in their lives a touchstone of hope.

Grim says he’s still a work in progress. It’s how he understands the children he helps. As a pastor for 25 years, a little scripture easily slips into his conversation, “In Genesis there’s a quote that says, ‘What the enemy meant for evil, God meant it for good.’ When you wonder why God puts you through things, you might later learn that you are put into those places so that you can eventually save people.”

Never getting complacent, staying creative and checking his biases are important to Grim. He believes that things get better when we accept new ideas, embrace change and bring people of all races, creeds, colors and beliefs to the table. Because each child is unique, not every process can be the same for every case.

“Why do we still call foster kids foster kids?” Grim asks, “I mean Foster Families are now Resource Families, At-risk kids have been renamed At-Promise kids, we do a time-in instead of a time-out, and we’ve changed the care model to be trauma-informed but we still use the words ‘foster kids’. There’s too much branding in this business; too many labels in the world.”

What would he call foster kids? Grim thinks for a minute. “I’d bring the child into it,” he says smiling, “Who do you want to be? What do you want to be called?” And with the simple dignity of a name, a child in Grim’s care feels seen, heard, understood and loved.

Prev
The light within: Latoya Brown draws on perso...
Next
Distance Learning Dilemma