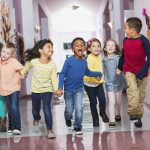 Childhelp, a nonprofit advocating for abused and neglected children, and Arizona State University (ASU) have officially signed on to the second year of a five-year partnership to make a national, measurable impact on the prevention of child abuse, through prevention education.

The Childhelp Speak Up Be Safe curriculum is a research-based program that engages children and their adult community – parents, teachers, school faculty, community members, and other safe adults – to keep children safe.

During the first year of the partnership, ASU tested, reviewed and recreated the Childhelp Speak Up Be Safe curriculum, covering Pre-Kindergarten through 12th grades. ASU also helped redesign and expand the facilitator training modules to prepare adults to deliver the lesson content.

“Our goal as we work alongside Childhelp is to create and build up the Childhelp Speak Up Be Safe curriculum to be truly unique and impactful,” said Dr. Wendy Wolfersteig, Ph.D., ASU Director, Southwest Interdisciplinary Research Center. “We are pleased to announce the release of an initial report of our activities and findings from the first year of our partnership with Childhelp, to share with the public.”

As the second year of the study kicks off this fall, Wolfersteig and her research team will focus on running a pilot study throughout Pre-Kindergarten to 12th grades, using the new curriculum in four elementary schools in the Roosevelt School District, and one high school in the Phoenix area.

As a part of this pilot, ASU will hold focus groups with teachers and counselors to get feedback on each section of the program, as well as gather initial data from children on their knowledge about staying safe. During year three, the program will be officially tested using a controlled trial to determine its level of evidence-based effectiveness.

According to Childhelp’s National Director of Prevention Education, Dr. Benah Parker, Ph.D., becoming an evidence-based program demonstrates the impact and effectiveness of the curriculum in helping children and their safe adults learn how to prevent and interrupt abuse.

“The partnership with ASU provides the data and evidence to show that prevention education saves children’s lives. With an average of five children each day dying from neglect or abuse, we must do more to address this epidemic,” Parker said.