Celebrities Put the Spotlight on Child Abuse in America 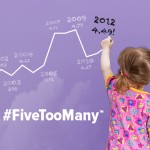 Soap opera stars, “E! News” correspondents and film actors have partnered with Childhelp to create a PSA that raises awareness of the staggering statistics surrounding child abuse in the U.S. The #FiveTooMany PSA brings to light the fact that nearly five children in the U.S. die each day from abuse and neglect. The PSA will air in April during National Child Abuse Prevention Month and Childhelp’s National Day of Hope on April 1.

“I want to do everything I can to help end child abuse in the U.S.,” said Jen Lilley, actress and Childhelp Celebrity Ambassador. “Lending my name to this cause and asking my friends to do the same is the least we can do. We hope the #FiveTooMany PSA will provide essential information so victims can get help.”

Sara O’Meara, co-founder, CEO and chairman of the board for Arizona-based Childhelp, believes it will. “The commitment of our supporters and celebrity ambassadors who have lent their names to this public service announcement proves that the world is filled with caring people who want to help end child abuse in the U.S.”