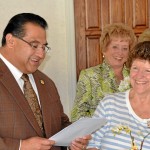 The Inland Empire Chapter of Childhelp installed its 2015-16 executive board June 17, at the Arrowhead Country Club in San Bernardino.

“I am very thankful Childhelp invited me to be a part of their installation ceremony,” Ramos said. “Childhelp is a great organization that is dedicated to helping children who suffer from abuse and neglect.”

The chapter began in 1980 at the Redlands home of former City Councilwoman Barbara Riordan, who recently reminisced about that meeting.

“I don’t really know how many attended, but it was a house full,” Riordan said.

The meeting was called to address the problem of child abuse and neglect in the Inland Empire, and an estimated 150 came — nearly four times the expected number.

The chapter now has 50 members throughout San Bernardino and Riverside counties and supports Childhelp and its many programs.

In September 2013, the chapter coordinated with the Redlands Council of PTAs to bring a representative from the Childhelp Speak Up Be Safe anti-bullying and child abuse prevention curriculum to speak to the council.

Later that year, Redlands Unified School District Superintendent Lori Rhodes, after a discussion with a council member, met with Assistant Superintendent of Student Services Jon Best to discuss implementing a pilot program of the curriculum. Seven schools in the district completed the sessions over the past school year — Franklin, Lugonia, McKinley, Mentone and Mission elementary schools and Beattie and Clement middle schools.

The program will continue next year.

“Not only will it continue, but I plan to expand it,” Best said.

The Inland Empire Chapter of Childheld also holds annual fundraisers to support the many programs of Childhelp, such as the Childhelp Merv Griffin Village in Beaumont and the Childhelp Speak Up Be Safe abuse prevention curriculum.

One new effort is the Strike Out Child Abuse bowling event, held around St. Patrick’s Day. The third annual bowling day will be held in March.

This year’s main fundraiser will be a Forest of Hope, a gala affair with entertainment, raffle prizes and the chance to win one of several elaborately decorated artificial Christmas trees. Local notables such as Rep. Pete Aguilar, former mayor of Redlands, have served as master of ceremonies.

This year’s Forest of Hope is scheduled for Nov. 21. The master of ceremonies and entertainment have not yet been determined.

The chapter meets the third Wednesday of each month at the Arrowhead Country Club in San Bernardino, and meetings are open to the public.

Prev
Seersucker Thursday for Childhelp
Next
Child abuse reporting up; thousands of childr...