(CNN) “God weeps” for the sexual abuse of children, Pope Francis said Sunday in Philadelphia, after meeting with victims of sexual abuse.

Francis met with five victims, including three women and two men, the Vatican said in a statement.

All were adults who suffered abuse as minors, either by clergy, family members or teachers.

The Pope listened to the victims’ testimony, talked with them both as a group and individually, and then prayed with them.

The site of the Pope’s meeting, St. Charles Borromeo Seminary, is significant since the local archdiocese was the subject of two scathing grand jury reports, in 2005 and 2011, that uncovered years of inadequate action on the part of church leaders to stop priests from raping and molesting children. The priest in charge of personnel was convicted of child endangerment in 2012.

In remarks to bishops following the meeting, Francis vowed “careful oversight” to ensure that youth are protected and said that those responsible for abuse would be held accountable.

“The people who had the responsibility to take care of these tender ones violated that trust and caused them great pain,” he said.

“Those who have survived this abuse have become true heralds of mercy. Humbly we owe each of them our gratitude for their great value, as they have had to suffer terrible abuse, sexual abuse of minors,” he said.

Pope Francis has met with sexual abuse victims before, including at the Vatican in 2014. During a homily given during a private Mass with six victims, Francis apologized and asked for forgiveness.

“I beg your forgiveness, too, for the sins of omission on the part of Church leaders who did not respond adequately to reports of abuse made by family members, as well as by abuse victims themselves,” Francis said in the 2014 homily, according to a text of the statement provided by the Vatican.

Victim advocates often dismiss such meetings as public relations ploys, and many were particularly upset this week after Francis praised U.S. Catholics’ “courage” and “generous commitment to bring healing to victims.” 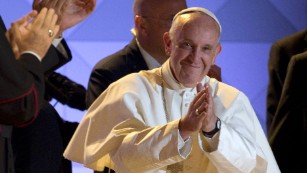 “Almost without exception, they have shown cowardice and callousness and continue to do so now,” Barbara Dorris of the Survivors Network of those Abused by Priests told CNN on Wednesday.

“They offer excuses, exploit legal technicalities and hide behind expensive lawyers and public relations professionals, hardly the marks of courage.”

In June, Francis created a church tribunal to judge bishops who fail to protect children from sexually abusive priests — a move long sought by abuse victims and their advocates.

The tribunal is not active yet, but two American bishops have resigned in recent months. The reasons for the resignations were not given, but Robert Finn of Kansas City was convicted in 2012 on charges of failing to report suspected child abuse, and Archbishop John Nienstedt of Minnesota resigned after prosecutors charged his archdiocese with six counts related to a sexually abusive ex-priest.