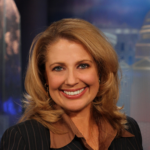 Named by the Washington Business Journal to its inaugural “Power 100” list of the most influential people in Washington, Maryland and Virginia, Rebecca Cooper has spent three decades in senior positions in media, business and government in the nation’s capital. In 2018, after 15 years serving on Childhelp’s Greater Washington Area Advisory Board, Rebecca joined Childhelp’s Washington DC office as National Spokesperson and Vice President for Public Affairs. She has been able to spend her many Childhelp years getting to see firsthand our children survive, heal and thrive.

The creator and longtime anchor of the weekly Sunday news show “Washington Business Report,” Rebecca has been awarded several of journalism’s highest honors during her years as an anchor, reporter and producer at NBC News, ABC News, CNN and ABC7 News/WJLA in Washington, DC.

Rebecca also served in the White House and State Department and in the U.S. Senate as a senior legislative assistant on the Senate Finance Committee.

A native Oklahoman and graduate of Duke University, Rebecca Cooper Dupin is the mother of three sons – Max, Gus & Finn – and one Schnoodle rescue dog.