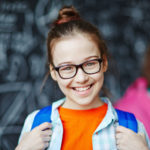 When we hear the word “childhood,” most of us instantly recall our favorite experiences from when we were young—the magic of the holidays, the excitement of a new toy or the giddy laughter of games with friends.

For the children that live at the Childhelp Merv Griffin Village, “childhood” doesn’t have the same meaning.  Our children have lived their short lives on a battlefield, where the people who were supposed to protect them are both their enemy and their only source to obtain the things they need for survival.  The effects   can be devastating, but the tools they learn at Childhelp can stop the cycle and give them a much better chance at life.

Laura was eight years old when she arrived at Childhelp.  Her father had been in and out of jail, appearing for a few months and then disappearing again without a word.  Her mother resented the life she had to live as a single mom, and it didn’t help that Laura looked like her father.  Her mother neglected and all but rejected her, leaving her to fend for herself most of the time.  Worst of all, because Laura had no one to protect her, her mother’s friends and boyfriends took turns using her sexually.  By the time Laura arrived at Childhelp, she had already seen more hardship than anyone should have to bear.

Her first night was very difficult for her.  Laura had never been around so many children at once.  She was surrounded by love, support and structure, but she didn’t know how to trust.  Because she hadn’t developed any tools to express herself, she had tantrums that would last for hours.  She would scream and bang her head against the wall, refusing to let anyone come near her.  The other children were frightened and the staff didn’t know how to reach her.  For the first few months, it seemed as though nothing helped.  She continued to tantrum whenever she was angry, upset or otherwise in pain, disrupting the cottage and refusing to participate in activities until she gradually cried herself to sleep.

Laura’s therapist and staff refused to give up.  Through constant reassuring and consistent structure, Laura learned to talk to a few key people.  She found a way to express with words what she was feeling, and her staff were able to show that her wants and needs were important to them—she could get what she needed if she helped others understand what was wrong.

Laura learned to sit with her therapist and make a list of her concerns so they could be addressed.  She even learned the power of the written word.  Once she discovered she could express herself on paper, she used her journal every day, choosing to write about her feelings rather than screaming.  The first time she was able to work through her anger and end with a smile was nothing short of magical.

Laura is much more in touch with her feelings now.  She has learned how to recognize her stress, what causes it, and what she can do about it, and she has healthier ways to express her emotions.  She rarely if ever has a tantrum and she no longer hurts herself when she’s upset.  Laura now understands that the life she was forced to live before is over.  She didn’t deserve it, and she never has to feel that way again.  She knows that healthy relationships do exist and she has a positive outlook on life.

Laura will transition to a foster family, and given the tools she has learned at Childhelp, we expect her to be successful.  Perhaps she will even become a writer someday.  Whatever Laura chooses to do with her life, she will do so with the confidence and coping skills she learned at Childhelp.