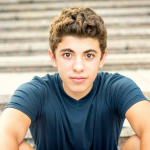 There are some cases that stand out as truly remarkable, perhaps because of their severity, or the outcome, or a combination of the two.  Anthony’s case was a roller coaster of challenges that ended in the most positive way possible—a permanent home.

She conceived two sons in her captivity and was only rescued when she was allowed to see a doctor to deliver the second child.  Anthony was three years old at the time and he had watched violence against his mother on a daily basis as she was used and abused.  Anthony himself was beaten, neglected, and molested before the system stepped in, and at the moment of their rescue, there were three children needing placement—Anthony, his brother, and his mother, who was still a minor.

It wasn’t Anthony’s fault, but because he and his brother were both the products of rape and abuse, their mother could never bond with them.  She may not have said it directly, but she made it clear that she didn’t want him.  Anthony bounced from placement to placement, lashing out at the world in anger or crying in utter devastation—“Why can’t my mother love me?”  He was depressed, understandably so, and he tried to punish the world for making him so unhappy.

Anthony was aggressive and assaultive, attacking peers and adults alike as he expressed his general discontent with everything around him.  He would destroy property, tearing items from walls and smashing everything he could.  He had difficulty bonding with adults, particularly women.  As he continued to refuse any form of treatment, it seemed that we would just be another name on the list of programs that couldn’t help.  No program can help a child who doesn’t want to be helped, and it seemed quite likely that Anthony was going to stand his ground, no matter what it cost him in the long run.

However, Childhelp isn’t in the practice of giving up.  We had addressed cases like Anthony’s before and we knew we would face the same again in the future.  We simply focused on the program, encouraged him to try, listened as he railed and tried to guide him towards a better life.  He was eight years old when he arrived, and at the time there was no legislative limit set on his treatment.  As long as we outlasted his poor choices, we would have the time we needed to be successful.

No other placement had kept him long enough to get through to him.  After a few weeks or less of his dedication to his poor choices, most programs simply discharged him, saying that he had made all the progress he was going to make in their care.  Childhelp contained him and continued, little by little, to chip away at the walls he had formed around his heart.

Gradually he started to open up in therapy, although he bonded more with a few key members of his cottage staff.  His behaviors quieted when it became clear that he wasn’t going to win and he stopped railing against the world.  Anthony started to show us who he really was, which made it much easier to help him.

A kind and soft-spoken boy underneath it all, Anthony was attacking the world first before it had a chance to attack him.  Once he learned that he was safe, he didn’t need to attack anyone anymore.  His depression was treated and his grades improved.  He started to talk about what he wanted to be when he grew up.  He had earned enough points by working towards his goals that he was able to go on an LA Chapter Outing to Dodgers Stadium where his whole live was about to change.

Anthony was ten years old, and he was selected to be the Foster Child of the Month for Dodger’s Stadium.  They posted his picture on the Mega-Tron Screen.  A wealthy dentist and his family were at that game.  They saw his picture and decided to make a few phone calls.  After meeting Anthony in person, their mind was made up.  They were certified as quickly as they could be and were excited to tell Anthony that he had a home to go to when he finished his treatment.

Anthony’s case was intense.  From its earliest beginnings, his was a tale fraught with violence and hardship.  While his very young mother abandoned him, given the circumstances it’s understandable.  When she turned 18, she married a man of her own choosing and together they had a child.  She chose to rebuild her life without the reminders of her trauma, but those reminders were also victims, living, breathing, and deserving of love.  Anthony’s brother was adopted immediately—infants are easy to place and he had not seen any of the hardships Anthony had faced.  Anthony was the last member of that tragic family to find his way.

From its earliest beginnings, his was a tale fraught with violence and hardship.  While his very young mother abandoned him, given the circumstances it’s understandable.  When she turned 18, she married a man of her own choosing and together they had a child.  She chose to rebuild her life without the reminders of her trauma, but those reminders were also victims, living, breathing, and deserving of love.  Anthony’s brother was adopted immediately—infants are easy to place and he had not seen any of the hardships Anthony had faced.  Anthony was the last member of that tragic family to find his way.

At 11 years old, Anthony finally had a permanent family, and when the adoption was finalized they called the Village to ask staff if they thought Anthony would like to have his own ATV as a welcome-to-the-family gift.  Anthony, who had never had much of anything, would want for nothing, and his forever home would be there to support him as he decided to go on to college and be anything he wanted to be in life.  He will do great things, but only because so many people stepped in to help him along the way.  Childhelp managed to outlast and

Childhelp managed to outlast and out love, and because of the dedication of staff and the clinical team alike, Anthony will never be a victim again.