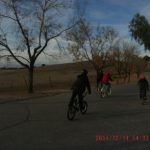 Brian arrived at the Merv Griffin Village on a cold October morning, staring at the world around him with eyes that were alert and frightened.  At the age of 8, Brian had already seen more than his share of hardship and he regarded the staff with caution, prepared at any moment to defend himself.  He couldn’t know, sitting in the intake office, that his fight was behind him, and it was no surprise that he was hesitant to accept our help.

Brian’s parents struggled with addiction, but that wasn’t their only challenge.  His biological father had never been a part of his life, and his mother married a man with a violent temper.  Brian’s step father beat his mother, and his mother was ill-equipped to protect the children, both from the devastating effects of witnessing domestic violence and from the violence that they themselves would experience at their step-father’s hands.  Brian had been locked in his room, called vulgar names, and he was physically abused by both his step father and his mother.  He was forced to the ground where his head was stomped by his older brother while their step-father stood beside them, encouraging and even coaching the attack.  They went so far as to beat Brian in the head with a plunger and to threaten his life, holding a knife to his throat.  When CPS closed in on the family to rescue the children, Brian’s parents smuggled the children across state lines, but they were thankfully caught and arrested.

With no one to protect him, Brian learned how to defend himself, biting, throwing rocks and chairs, punching, kicking, scratching, and threatening to kill the adults in his life.  He was unsuccessful in multiple foster placements before moving to a group home, and his previous group home was unable to curb his aggression.  When he arrived at Childhelp, he was prepared to fight his way out of yet another facility.

Brian had spent his life struggling for the basic necessities, moving from apartment to apartment in an urban setting.  Moving to the Merv Griffin Village granted him the opportunity to completely change his definition of “normal.”  The meals and snacks provided every day helped him realize that his needs would be met here.  However, like most children, he sometimes defined his “needs” to include things that he couldn’t have, such as candy before dinner or the opportunity to play with something that didn’t belong to him.  When staff had to tell him “No,” his tantrums surfaced, with all the biting, kicking and name-calling that his case-history promised.  Our well-trained staff didn’t allow his actions to earn him the attention he wanted.  Instead, they suggested that he go outside and play to vent some of his anger.

Hiding from CPS and living with secrets didn’t allow for much outside-time in Brian’s young life, and he enjoyed running through the grass and playing on the playground equipment at the Village.  Brian received his new bicycle shortly after he arrived, just like all Village residents, and he took to it immediately.  Our staff taught him how to ride, and they noticed a marked difference in Brian the first time they went out to ride as a group.  His face was flushed, his eyes sparkled and he was smiling ear to ear.

In the coming months, Brian would open up to his staff and therapist.  He began to control his temper, asking if he could please go outside rather than lashing out in a difficult moment.  He asked for a bike ride every day and staff took him for a ride around the Village as often as possible.  When a camping trip was planned through our Wilderness Therapy program, Brian was among the first to be chosen—if the outdoors was this child’s sanctuary, than that’s where this child should be.

After 13 months at the Merv Griffin Village, Brian was placed in a foster home without incident.  His biological family may or may not have the opportunity to reunite with Brian depending on the outcome of their treatment and court cases, but his foster family is interested in adopting him if they are allowed to do so.  Brian is no longer the angry, frightened boy he was when he arrived.  He will never completely forget the challenges he faced, but thanks to his time at the Village, he will be more likely to run around the block than he would be to react violently.  We were able to break the cycle of abuse and give Brian a chance at a healthy life.

Brian currently lives with his foster family in a quiet residential neighborhood where he rides his bike around the block nearly every day, healthy, smiling and safe.