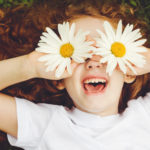 Joyce was only six years old when she arrived at the Childhelp Merv Griffin Village.

She stood waist-high to most of the staff, her perfectly straight blonde hair framing her face and falling to her shoulders.  She was polite and organized during intake, seeming much older than her actual age as she answered every question she was asked and tried to carry her belongings all by herself.  Initially it was difficult to imagine how such a beautiful and well-behaved little girl could belong at the Village.

It didn’t take long to discover the problem.  Joyce would attack any adult who walked in to the cottage, punching, scratching and biting them on sight.  Walking through the office she seemed fine, but once in a home-like setting she was very difficult to manage.

Shortly after her arrival, Joyce came to the Administration Building to select her Christmas dress and immediately her tragic history became apparent.  When she immerged from the bathroom wearing her red velvet gown, her entire demeanor had changed.  Her lips were pouted dramatically and she had one hand on her hip.  She crossed one leg over the other as she walked, nothing like the bouncy six-year-old she had been three minutes before.  She had been trained, and any child who had been conditioned to be seductive had every reason to distrust adults.

This beautiful little girl had been a source of income for someone and had experienced more violation and suffering in her short years than most adults experience in a lifetime.  It was no wonder she felt the need to fight to protect herself in her cottage.  To her, any room with a bed was a battle zone.

Her behaviors were difficult but they were also short lived.  A few weeks after her arrival, Joyce had adapted considerably.  She was particularly excited to see the bowl of fruit in the kitchen.  “There are snacks here every day!” she said with a combination of happiness and surprise.  Such a small thing meant so much to her, clearly illustrating a life of neglect.  Too often she had gone hungry in the past, and seeing that bowl of fruit told her every day that she would not go hungry again—not today, not at the Village.

Every child at the Village responds to something.  For some of the children, it’s their time in the art room, drawing the experiences they can’t vocalize.  For others, it’s music, or time spent at the ranch.  For Joyce, it was food.  She would look over at the kitchen as though deciding whether or not to respond when staff would try to reach for her or give her directions.  Three meals, three snacks and unlimited access to fruit every day told her that she was cared for, and if the staff could be trusted to keep her from hunger, Joyce could listen to them in return.

In therapy, Joyce was cooperative and polite, eventually sharing her stories, her feelings and her fears.  When asked what she liked to do at the Village, she said, “I love to go swimming, going on outings, going to the movies, and staying up late on the weekends.”  Her answer was delightfully child-like—an age-appropriate response from a small girl who was far too old for her age when she arrived.  Her therapist asked her how she liked Childhelp and she said, “I love it here.  Nothing bad is going to happen to me here.”

Six months after she arrived, Joyce ran through the halls of the Administration Building, her feet pounding against the tile like any happy six-year-old.  She couldn’t wait to tell everyone that she was going to a foster family.  She was going to have a home of her own.  Since her case was marked for permanent placement, in time we hope her foster family pursues adoption.

Joyce is a beautiful little girl with a rich, full life ahead of her.  She was lashing out at the world out of fear, not anger, and as soon as she knew she was safe she was more than happy to stop the fight.  Joyce may have had a tragic beginning, but thanks to her time with Childhelp, she has a much brighter future.