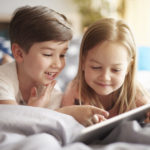 It is easy to cite all the ways in which “The System” is broken.  Some children are left in dangerous homes for far too long, and children have to bounce from home to home before they qualify for therapeutic services.  There are times, however, when no one could have known, when “The System” did everything one would expect and still the children are harmed.  Once the problem is discovered, actions are taken as quickly as possible, but that’s not always enough.

Justin and Robin came to the Merv Griffin Village straight from their mother’s house—not a common occurrence within the restrictions of “The System.”  Their situation was unique.  They had been living with their biological father because their mother traded custody for her drug addiction.  “The System” had worked—the children were safe and they didn’t have to be removed from family to do so.  Unfortunately, their father was a pedophile.  Their mother’s drugs may have been more obvious, but their father’s addiction was far more dangerous.  He used the children for his own gratification and forced them to perform acts on each other while he watched.  The children, not knowing any better, just did as they were told.

Meanwhile, their mother took the loss hard.  She managed to complete rehab, fell in love, got married and had another child.  Life had given her a second chance.  She only wished that she could have been there for her first two children, something she hoped she would be able to do more in the coming years.  She had no idea that her children weren’t safe.

Eventually, the abuse was discovered, and the children were removed from their father’s care and returned to their mother, now a fit and active parent.  She cared for the children throughout the court case.  Their father was found guilty and sentenced to prison, and the family arrangement was official—Justin, Robin, and their 5-year-old half-brother lived with two healthy parents, ready to rebuild their lives.

However, punishing the abuser doesn’t fix the children, and Justin and Robin had learned how to love in inappropriate ways.  Still working with a social worker on the case, their mother called for help when she found both of them attempting to share their love with their young brother.  They were just too sexually reactive to be safe around other children.

Most of the children we receive have been through ten or more homes before they come to us.  The one major exception is those whose behaviors are sexual.  Childhelp is the only program in Southern California that has a specialized cottage for children who are sexually acting out but who have not yet crossed the line to become perpetrators themselves.  We are the last stop before a child ends up with a criminal record as a sexual offender.  Children do what was done to them—they learn by example and that’s all they know.  Understanding the trauma explains the behavior.  These children need special attention and appropriate love.  They don’t need to be further abused with labels that will follow them long after the behaviors have been addressed.

Justin, age 9, and Robin, age 7, arrived together with the clothes on their backs and the promise of a suitcase each in the morning.  It was a same-day placement, looking to get them into treatment as soon as possible.  Robin bounced all over the Intake office and even tore up and ate a post-it note before it could be taken away.  Justin sat quietly, looking around intently and asking when they would be able to go home again.  They were both nervous – they just chose to show it in different ways.

The cottages at the Village are separated by age and gender, so there are no brothers and sisters living together on grounds.  However, for this duo, even greater efforts were made to keep them apart.  For the first two months, it was necessary to help them work through their individual problems without the temptation of each other.  At one point, an Assembly for all the children allowed them both to be in the Children’s Activity Center together, but they did not sit together.  Justin ran up to staff and excited announced that his sister was going to be at the Assembly, too, and the stars in his eyes told his story.  That little boy was infatuated with his sister, loving her as both a sibling and as a romantic partner.  He had experienced feelings much too big for his age and he didn’t know any other way to deal with them.

The Sexually Reactive Program is specifically for boys, age 9 to 13, who are showing signs that they may become sexual offenders if their behavior isn’t addressed.  Because of how often our little girls arrive with a sexual abuse history, all of their cottage staff are prepared to deal with sexualized behavior, but it’s more common for girls to become promiscuous than it is for them to victimize another child, so their behaviors are addressed as part of their overall treatment rather than requiring a specialized program.  Justin needed the attention, supervision and focused therapy of the Sexually Reactive Program while Robin benefitted from the structure of the cottage and the constant loving redirection of cottage staff, continuously emphasizing appropriate boundaries. Both children progressed well, gradually meeting goals and learning to behave appropriately.

The family participated in family therapy and had visited in the last few weeks of the children’s treatment.  When Justin and Robin left the program together in February after just over a year of treatment, they returned home to their mother, stepfather and little brother, ready to be a family.  Both learned more appropriate ways to express love and both had successfully graduated and met their goals.

Justin and Robin are loving, sweet children who didn’t deserve what happened to them.  They wanted to love each other and to share that love with their new brother not because they were trying to misbehave but because that’s the way they were taught to love.

Here at the Merv Griffin Village, “All Who Enter Here Will Find Love” in the appropriate way—transformative, beautiful, healthy love.  Justin and Robin know all about that love now.  It’s a love they can share with their family, and eventually with their own children.  Childhelp stepped in where no one else could and rescued not just the children, but the whole family, preventing another young victim while helping both the children and their parents adjust.  That’s an outcome everyone can love.