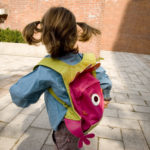 Georgie had a sparkle in her deep brown eyes that hinted at the intelligence and playfulness behind them. Her dark hair was cut short, with the top long and flopping to the side, covering one eye. She loved to run, and often gave chase just for the sport of it, leading staff members all around the Village almost every day. She was a character and a challenge, but she was also a sweet, brilliant child who didn’t deserve what happened to her.

She was born to a mother who was drug-addicted and prison-bound. She was neglected and molested on a daily basis, never knowing any other life. She found herself in “The System” at a very young age with no family to go home to. Her mother’s whereabouts are still unknown, as is her father’s identity. Once in foster care, her abuse continued, and it is alleged that more than one of the men she encountered in her temporary homes acted on her sexualization. She developed coping mechanisms that made her very difficult to place, from deliberate self-soiling to acts of violent aggression. At the age of ten, she was approved for placement at the Merv Griffin Village because no foster family would take her.

Georgie seemed determined to make Childhelp her next failed placement, assaulting staff and children alike. She was moved to our Non-Public School because of her behaviors, and she would refuse to do any class work because she claimed it was too easy for her. Without her cooperation, it was impossible to get accurate test results—no one knew what she was capable of doing. From both the cottages and the classroom, she would lead adults on a trek across all 123 acres of the campus. Her grades continued to fall and her behavior did not seem to improve. For ten months, everyone tried everything they knew but she simply refused to participate in anything. At her Treatment Team Meetings, they started to discuss changing her placement. Maybe this wasn’t the best place for her. Maybe there was someone, somewhere who might get through to her, but we just didn’t know what else to try.

One day, Georgie was running from school after only being in class for less than an hour. According to her teachers, that was normal and she rarely made it past the two hour mark each day. This time she cut through the administration building in hopes of losing her pursuers, giggling as she went. Many members of the administration team left their door open, and heads popped out of offices all the way down the hall as she passed. Kimberly, the Children’s Outreach Coordinator, followed her. Prior to Childhelp, Kimberly worked as an elementary school teacher, and as much as she loved her job at Childhelp, she missed working with the children.

Once outside, Georgie stopped to catch her breath. Kimberly stepped up behind her. “Hey,” she started casually. “What’s up?”

Georgie giggled and started to run again. Kimberly waved to the staff members who were closing in and they nodded, staying back. She called after Georgie playfully, saying, “I’m way older than you, girl. There’s no way I can run after you. Why don’t we find someplace shady to talk instead?”

Georgie turned around and saw the other staff members pulling away. She shrugged. “Ok,” she said, heading towards the grass in front of the admin building. She wouldn’t have admitted it, but she was out of breath, too.

Together, Kimberly and Georgie laid on the grass for nearly an hour. They looked up at the clouds and tried to find pictures in their shapes. They rolled onto their stomachs and kicked their feet up behind them, resting their heads on their arms on the cool earth. Whatever Georgie did, Kimberly mirrored. It was completely non-threatening and no one asked Georgie to do anything she didn’t want to do. That’s the only reason Georgie stayed.

Finally, it was time to start asking more difficult questions. “Georgie,” Kimberly started, “What do you want to be when you grow up?”

“A nurse,” Georgie said without hesitation. “I want to help people and nurses help people.”

“That’s a wonderful idea!” Kimberly answered. “I think you’d make a great nurse. But let me ask you this—what does someone need to be a nurse?”

“They need a stethoscope and shots—”

“Oh, silly! I mean what do they need to become a nurse? Could you just decide to be a nurse right now?” Kimberly asked.

“That’s right. What do you think a nurse needs to study in school?”

“I bet you’re right,” Kimberly said. “Do you like studying that stuff?”

“Yeah,” Georgie said, sounding more than a little cocky. “I’m the best at math. They only give me baby work at school. That’s why I won’t do it. I’m way smarter than they are.”

Kimberly nodded. “I bet you are, actually. You seem really smart. But let me ask you this—how can they know that you’re smart if you never show them? What if they keep giving you baby work because they have no idea that you can do more? The only way for people to know how smart you are is for you to do that baby work as fast as you can, get a perfect score, and prove to everyone that you really are too smart for that school.” She paused, pulling at the grass exactly the same way that Georgie did. “If you never did another assignment in school ever, would you be a nurse?”

“What do you think would happen instead? If you grew up but you never finished your school work and you never learned anything new, what would happen?”

“I would probably not be able to get a job. Or I’d get a job at McDonalds or something like that.”

“Hmm. You’re probably right. Do you think you’d ever be a nurse?”

Georgie was quiet. After a minute she shook her head again.

“Let me see if I understand you,” Kimberly said, bumping shoulders with the girl playfully. “You won’t do the work at school because you’re too smart for it, but if you don’t do the work you can’t ever be a nurse. You’re willing to give up your whole dream, just because you don’t like sitting in class? That doesn’t seem like the smart Georgie I know. You’re way too smart for that.”

Georgie smiled but wouldn’t look up.

“Your future starts now, my friend. It would be a shame for you to give up everything that’s important for you just because you don’t like school. I think the best thing you can do is start doing your best. Then they’ll give you harder work so you won’t be bored and then you can even go back to regular school. I have an idea—I know a math game that you can do at your desk whenever you’re bored. Not only will it be more fun than just sitting there with the baby work, it will prove to your teachers how smart you are. Do you want to try that?”

Georgie was intrigued. She agreed to go back to Kimberly’s office where she learned a math game that was both fun and challenging. She went back to class willingly a few minutes later.

Georgie didn’t run through the administration building again. In fact, her running behaviors decreased significantly, as did her aggression and other challenges. Whenever she would see Kimberly, she would run up and throw her arms out in a giant hug, shouting, “I’m playing the game!” She taught it to her teachers and her staff, which made her feel important and gave her the positive attention she needed. She did her work in class. She was right. She was too smart for the work she had been given.

Two months passed quietly. Kimberly attended the monthly awards ceremony in the Children’s Activity Center with other members of the administration team and she nearly cried when she heard the announcement. “And for most improved, Georgie!” The little girl ran down the bleachers to get her certificate, then ran back up, offering a little wave as she went by.

So many people did everything they could to help Georgie, and each and every one of them deserve a portion of the credit for her remarkable turn-around. It wasn’t Kimberly who made the difference, it was the fact that someone new was willing to take the time. It was just the right moment for Georgie to hear what she needed to hear. With so many therapeutic tools in place, the piece that was the key to opening her heart was a simple math game, offered at a time when she needed to feel smart and special.

Georgie will be ready for a foster home soon. Hopefully she can find a family who can see the beauty in her amazing mind and offer her a permanent home. When she’s a nurse, she’ll be able to tell the story of Childhelp, and how many people worked to help her so she could grow up to help others.

And if she ever has a young patient who needs something to do while they wait, she’ll probably teach them to play a math game.

Prev
Gerardo’s Story
Next
Telling Someone