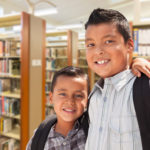 When ten-year-old Gerardo walked into the Merv Griffin Village Intake office, his deep, brown eyes couldn’t settle on anything.  They darted from one face to the next, and then to the door, as though he was continuously assessing who might attack him, whether or not he could win the fight, and how quickly he could escape the room.  Through all the paperwork, the questions, the medical assessment and his tour of the Village, he never smiled.

His younger brother had been placed with a foster family who planned to adopt him, but Gerardo had been too difficult to manage.  The family wanted to keep the brothers together, but Gerardo’s aggression had made a home placement impossible.  It simply wasn’t safe to keep him there.

On his first day at the Village, Gerardo found himself in three different fights.  He couldn’t seem to stop.  He would be calm and happy one minute, and wildly attacking a peer the next.  Anything could set him off.  He fought at school, during activities, and in the cottage. It didn’t matter where he was or who was with him—Gerardo was fighting in a war that no one else could see, and for him, every situation was life or death.

Like most of the boys who come to the Village, Gerardo had been physically abused.  His father had a drinking problem and a history of drug use.  One minute, his father could be calmly sitting on the couch in whatever apartment they had arranged to stay in for the night.  The next, he could suddenly lash out, claiming that Gerardo had made too much noise or broken some rule.  To protect his little brother, Gerardo had always placed himself in harm’s way, but as a result, he had borne not only the welts and bruises but the post-traumatic stress disorder that came with them.  Even when he was removed from his father, he couldn’t leave his own personal battlefield behind.

Gerardo lived at the Village for 19 months—quite a long time for a ten-year-old.  For the first year, his response to any difficult situation was violence.  He attacked staff as well as other residents and it was very difficult to get him to participate constructively in homework, chores, or anything he didn’t want to do.  Consistency is the key with any child, and staff continuously reinforced that he did not need violence to be safe.  No one would hurt him while he was at the Village.

As an abused child, feeling helpless, hopeless, and alone is a daily torment.  At the Village, no child is ever alone.  From the ever-present staff to the other children in each cottage, there are always people around who care, who understand and who are there to help.  Gerardo watched the world with eyes that had seen too much, but the longer he was with us the more he could see through his pain.  He was surrounded by boys about his age who had similar stories to tell.  He started to talk to them, and then to his therapist.  Once he realized he was truly not alone, he was able to form relationships based on trust rather than fear.  Gradually his aggression diminished, and while he was often very depressed his behavior had improved dramatically.

He started visiting with his foster family—just for an hour or two at first, but he eventually stayed for a weekend without incident.  When he was ready, Gerardo’s foster family invited him to live with them again.  He would be joining his brother, who by this point had already been officially adopted, and in time Gerardo would be adopted, too.

Gerardo had been forced to be a warrior, facing violence every day at the hands of the person who was supposed to protect him.  Despite this example, Gerardo learned to be his brother’s protector, and he bore the battle scars that came with his role.  Rather than spending his life at war, Gerardo learned that he didn’t have to fight.  Thanks to his time with Childhelp, he knows he’s safe.

As he was leaving the Village to return home, Gerardo shook hands with the staff like the fine young man he was growing to be.  He looked them in the eye and he smiled.  For a child like Gerardo, there can be no greater success than that.