Kaylee’s Story: You are Loved 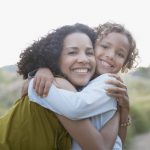 I was four years old, going on five, when my father came home from the service with a new wife- my new stepmother. She was also in the service, and since they were both still serving we had to move to California. At first, I thought it was going to be good. I got to spend time with my dad and get to know this woman who would be my new mother. I thought she was so nice, and it wasn’t long before I had a baby sister.

I was going to love my life in California with my new mom and baby sister— or so I thought. I don’t remember when the abuse started. I just remember I never did anything to deserve it (nobody does). I was always grounded, and she would hit me with a belt, a shoe, a toy, her hand; whatever was in reach it seemed like. I remember one time when my sister was two, I came home from school and our room was destroyed (toys thrown everywhere).

I was blamed for it, beaten and told to clean it up even though it was my sister that made the mess. I used to be so afraid of my stepmother that when my sister and I would have to take showers together I would walk sideways with my hands across my butt because I was afraid she would come after me with a belt or other object. She hated me and I never knew why. Till this day I still don’t know. My father never listened to me when I tried to tell him, and he was barely home while the abuse was happening.

My father and I finally left my stepmother, and for the longest time I pushed those memories out of my head— blocked them out in hopes of living a normal childhood again. I had no such luck. I still think about it. She has seven kids now including my sister and brother (who was born sometime between the beatings and us leaving), and I fear that she hurts them too or that she has.

It is because of my experience and because of all the stories that I’ve heard over the years that I want to do something to help kids who have been abused or are being abused. If you’ve experienced abuse, I want you to know that you are not alone. You are special and beautiful. I want you to know that speaking up and telling someone you trust is the right thing to do- for you! And just because it seems like your parents or whoever has hurt you doesn’t love you or care about you, that doesn’t mean that nobody does.

Even though we don’t know each other, I care about you. I care about all of you, and it is my goal in life to do something to stop abuse and help kids like us.

Prev
Art is my victory: A story from an adult who ...
Next
Michael’s Story: The Road to Recovery