Michael’s Story: The Road to Recovery 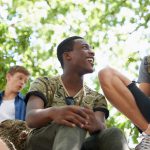 Prior to my arrival at Childhelp in 1996, I was taken out of my mother’s home and placed with an aunt who was just as bad. My mother was a severe drug user addicted to methamphetamine; her addiction affected her parenting skills. We children were exposed to environments we never should have been exposed to at such a young age. Mom never abused us, we just weren’t treated like we were supposed to be.

It was late one evening, and usually my aunt would take care of us. However, my Aunt wanted to get out and have a little fun one evening. So my mom ended up taking care of all my cousins. At one point in the evening, although I was lying right next to mom, she was upset because nobody was minding her. So in her anger, she hit me several times with a belt. A few days later, I was being watched by my aunt when she discovered the welts on my back she was furious! She asked my mom “What happened?” She responded, “I messed up!!”

It was later revealed by somebody and eventually reported to C.P.S. and I was later removed from my home. When I was placed at Childhelp, I felt love the minute I walked into the office and chose my “stuffie” I wanted to keep. I remember it was a little rabbit that I tugged around by the arm. I remember the sweet voice who said “Go ahead you can pick one.” Her name was Jennifer if I remember correctly.

I was then placed in Cottage 4B and I remember meeting the staff there. They were just so awesome and some of them I looked up to as mothers. I remember I was at Childhelp for a few weeks and then a new staff member came along and her name was Kym Young. We quickly bonded because she reminded me so much of my mother. Kym read Dr. Seuss to us and I had always loved Dr. Seuss books growing up. I even had a little collection of my own. I didn’t know about church but every Sunday we got dressed up in our little suits and headed off to chapel. It was an important part of our schedule.

Going to Childhelp was such an amazing part of my little journey in life. I made so many great relationships that I still have today, but so many kids forget about the relationships they make. Since the staff at Childhelp made such an impact in my life, I continue to keep in contact because I feel that keeping in contact with the staff I liked helped me when I looked back and began feeling sad.

Overall, I cannot count the number of homes I was placed in because it’s such a numerous amount. I began to develop an anger problem from being away from my mother and unfortunately the sadness turned into anger. I cried a lot but the tears became vicious and I wanted to hurt everything in my way.

That is the reason I was placed in so many homes. I am 17 now and I have a hate for Child Abuse/Neglect. I also have a hate for drug abusers because what I had to go through. I am always going to have ties with Childhelp and at some point in my life, I want to work for Childhelp or do a volunteer activity to support the organization.

I have now been back home with my biological family going on three years in October 2010.  Even though there have been those downfalls where mom gets incarcerated, I still have family who cares about me. Without Childhelp I wouldn’t be who I am today, I wouldn’t be respectful, I wouldn’t have morals, I wouldn’t care about life and what goes on in it. If my mother raised me from the beginning until the end I think I’d be in prison somewhere perhaps dead.

Thanks Childhelp for being the turning point in my life and making a difference.