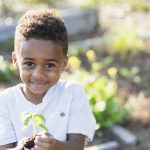 Sweet little boy (5 years) in community garden, holding a seedling in his hands.

Like all of the children who live at a Childhelp residential facility, Phillip had a rough start. The boy’s mother had severely abused him. The marks on his body indicated that she may have burned him with cigarettes when he was very young. After he was taken from his mother and entered the state system, he went from foster home to foster home because of his behavior. His outbursts included screaming for more than an hour if put in time out.

Eventually, the state referred him to the Merv Griffin Village in Southern California. Over time, the boy became captivated by plants and grew into a devoted gardener. His concern about them was so great that, when some new trees were planted near the cottage where he lived, he warned the groundskeepers that he didn’t think they were getting enough water.

His interest inspired a Childhelp staff member to ask the 10-year-old, “If you could be a plant, what kind of plant would you be?” He thought for a second and then said, “A Christmas cactus.” The staff member asked why he chose that plant. The boy answered, “Because it’s a pretty plant and it grows forever. You can just cut off a piece and stick it in the ground and a new plant grows.”

Like many of the children who come to the Childhelp villages, nature provided this boy with an effective route to healing. He learned that living things need nurturing and regular attention if they are to grow healthy and strong. And, through all of the Childhelp programs, he gained the inner strength and resources to see himself as someone who is capable of growing anywhere.