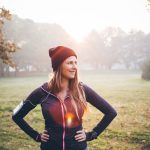 Young woman jogging outside in sunny autumn forest. She took a break to rest and drink water. The sun is shining in the background. (Getty Images)

It’s difficult to put my twelve years of sexual, physical, emotional, and neglectful abuse as a child into words that would fit into a story here. As a child, the abuse was a constant. My stepfather started sexually attacking me at age 5, the night of my mom’s bridal shower. His attacks were always as hurtful as possible. He enjoyed the fear in my young eyes.

He loved to find a reason to beat me so that he could see that fear. For twelve years he controlled everything in my life. My mother chose to ignore the brutal physical attacks; the bruises & bleeding. She allowed him to take me on their dates at around age 12. My mother walked in on us, me in his bed naked at age 9; but I was the one who got punished and sent to my room for the night.

Mom completely neglected my care. There were never any hugs of tenderness or encouragement. She never bought me a tooth brush, took me to a dentist, or cared about any other need of mine. At age 13 I chose to stop bathing because he loved to trap me, it didn’t matter who was around. He was a very sadistic monster and my mother turned her head. The entire town knew who my parents were and they knew if I sneezed, but everyone ignored the filth on my skin, the decay in my mouth, and the monster who was my stepfather.

There was never anyone to talk to or a safe place to run.

This was during the 1970’s; society was starting to take notice, but no one would challenge the monster I lived with. Every day I held my breath and worried about when he would attack. One night I tried to prevent the molestation by putting on my brother’s flannel pajamas – I was beaten and thrown around the house for two hours.

Since there was never anyone who even questioned my well being or tried to protect me; I became trained to accept violent behavior. It led me through a path of over 20 years in brutal domestic violence. One relationship after another was just someone else to beat on me. The last beating I accepted caused permanent injury which has left me disabled.

It was after that beating at 37 when I made the decision that no love was worth this type of abuse. My children and I would be safe and I did it on my own. Finally, my life changed; when I made the motions to change it and stop the abuse against me.

It’s been 10 years since I’ve been safe and I’ve chosen to share my story with others. Anyone who survives these crimes should be so proud of themselves and appreciate their strength. Look at what we have gone through, is there really anything in life that could destroy who we are? They might try and they might leave their mark, but they cannot destroy what is created inside of us. You can thrive in your world and believe that there is happiness after abuse – I am living proof!!!

May all survivors find their courage to speak out about their pain and tell their story so others will learn. Find your happiness in life, it is there!!!!

Prev
Author Shares How He Overcame Childhood Sexua...
Next
Charity’s Story: Being able to forgive ...