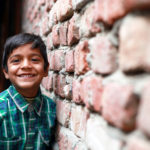 When Samuel arrived in June of 2004, the world of residential care was a different place.

Children were allowed to stay as long as they needed to, which meant that many were placed and forgotten by overworked social workers who didn’t feel the need to move a child out of any placement unless absolutely necessary.  The term later applied to the unfortunate habit was “warehousing,” and it is the reason for current legislative trends that have shifted the pendulum too far in the opposite direction in an attempt to correct the problem.  When a child is ready to graduate but is not allowed to move on to the next step, they often regress, something Samuel can share first-hand.

Samuel had suffered as many children who come to the Merv Griffin Village suffer—he was a product of a broken home, affected by addiction and domestic violence, neglected and physically abused.  His behavior could be very difficult to manage, from the angry outbursts one would expect from a child who had never had the opportunity to develop a trusting relationship with an adult, to a constant desire to run away.  Childhelp was the perfect placement.  With so little development around the Village at that time, he could run as long and as hard as he wanted to and still have nowhere to go but back to the cottage.  He needed to know that he was safe, that we would continue to provide for him even as he lashed out, and that no matter where he ran he would still have a place to call home.

Gradually he progressed, rose in the level system and enjoyed the rewards he had earned.  We contacted the social worker to tell her that he was ready to graduate, but we would be happy to keep him until she was able to arrange his next placement.  Time passed and Samuel began to lose hope.  His running behavior, which had been resolved, had a resurgence, and he started to lose ground.  “Who you are is about you, not about your social worker,” his therapist told him.  “You can’t let someone else’s actions decide who you are going to be.”   They were big words for a young boy to understand, but he tried.  Eventually he moved to a foster home, but it took years.  He officially graduated from the Village in February of 2007.

Because of privacy laws surrounding children in foster care, we are unable to follow our cases once they are no longer placed with us.  We all imagine that the children are doing well, growing up and starting families of their own.  We don’t like to think of them struggling, but many of them do, at least for a time.  In some cases, that struggle is part of the healing process, and the things they learn at the Village aren’t fully realized until those children become adults.

Samuel struggled when he left Childhelp.  He missed his friends and the structure of the program here at the Village.  He ended up running away from foster care and spending two years on the streets, homeless.  The same social worker who was too busy to find him a home when he was ready to leave the Village was also too busy to find him on the streets.  His file was left open in case he came back before his eighteenth birthday, but he never returned.  That might have been the end of his story, but some lessons just take longer to sink in.  Samuel still had some learning to do, even though he was no longer physically here with us.

One thing that Samuel said every time he was asked about his future was, “I want to be a soldier.  I’m going to go into the army and help protect our country.”  Many young boys talk about joining the service—it’s as common as the desire to be an astronaut or a rock star—but most of them change their minds as they grow.  Not Samuel.  Even on the streets, making questionable choices and wondering where his next meal would come from, he talked about being a soldier.  “I can’t right now—I’m stuck out here.  But someday.”

Samuel’s challenge, like so many of our kids, was that he had a lot of people in his life to blame.  He could blame his parents for failing to care for him when he was young.  He could blame his social worker for not doing her job.  He could blame his teachers, his peers, and just about anyone who he felt had ever wronged him, and he was right.  A lot of bad things had happened to him and he had good reason to be angry at the people who either caused his pain or did nothing to stop it.  The problem was that blame doesn’t come with a paycheck, a warm bed or a hot meal.  No matter how valid the blame may have been or how unfair the situation, the only person who could change life for Samuel was Samuel, something Childhelp worked on with him throughout his stay with us.

He looked at his life—living on the streets, panhandling and even stealing.  He looked at who he had become.  He thought about his dreams, and then he thought back to the only time he had ever really felt safe and loved—his years at the Merv Griffin Village.  “This isn’t who I want to be,” he finally said.  “Those things that happened to me—those were someone else’s actions, and I can’t let someone else’s actions decide who I want to be.”

That day, he found a gas station bathroom and cleaned up as best he could.  He found a phone book and looked for the nearest Army recruiting office.  He walked in, offered his best salute to the officer behind the desk, and said, “I don’t have much to brag about in my life, but I’m ready to change that.  I’m done letting other people’s mistakes define me.  I’m ready to take control of my life, and I want to be a soldier, Sir.”

Samuel not only joined the Army, in it, he was able to redefine himself.  He takes pride in what he does and he knows he will always have a place to belong and the skills to succeed.  He came to visit the Village to thank all the people who helped him when he needed it most.  “The things I learned here—that’s what made the biggest difference in my life.  Now that I’m not living in anger about the past, the only part of my childhood I like to remember is this part—the time I spent here.  I may not have been really ready for all that I was learning, but it sat in my head until I was ready.  I don’t know where I would be today without what I learned at Childhelp.”

He recently got married, although he’s not quite ready for children yet.  He was scheduled to return to Colorado soon after the visit so he had to go.  “I just had to stop and tell you—even when you think the kids aren’t listening, we are.  Don’t stop—don’t ever stop—because we need you.”

Thank you, Samuel, and Godspeed on your travels.  We know that we are safe at home because of what you and the rest of our troops are doing.  We need you, too.