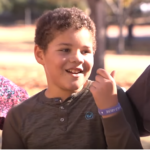 Zachary was removed from his biological mother when he was about three months old. The foster care parent with whom Zachary was placed adopted him, and for a while he reportedly did well and was known to be healthy. Then his adoptive mother withdrew him from school and insisted on homeschooling him. Zachary all but disappeared.

Following Zachary’s 5th birthday, his mother was asked to meet with a school psychologist to discuss one of her other children. Zachary happened to accompany her to the meeting, and what the psychologist saw was shocking: the entire left side of Zachary’s face was bruised. He was thin and anxious, and he said, “I hungry, Mama” – a plea for sustenance that fell on deaf ears. After the meeting was over, the psychologist called law enforcement to investigate. They took custody of Zachary after observing that the boy had a “distended and bloated stomach” as well as “significant injuries on his body inconsistent with his mother’s explanation that he was ‘self-hurting.’”

Childhelp became involved after being contacted by law enforcement. We prepared for Zachary’s arrival at our Childhelp Children’s Advocacy Center, where Dr. Kathy Coffman was ready to perform a medical evaluation.

When Zachary’s shirt was removed for his exam, it became apparent that the boy was not just suffering from malnutrition. Dr. Coffman observed a black eye and other injuries on his back, arms, and legs along with symptoms associated with starvation – including sparse and brittle hair, loss of fatty tissue underneath the skin on his arms and legs, and swollen and red feet. Most urgent, Zachary was in severe respiratory distress. His abdomen was so distended and hard that it was compromising his lung function. He needed a hospital.

It took less than five minutes to rush Zachary to the hospital. Once there, the chief of surgery pronounced that food had been withheld from the boy “for some fairly long period of time,” possibly for “weeks.” He was diagnosed with protein calorie, protein energy malnutrition that caused abnormalities to his internal organs, muscle wasting, and brain atrophy. What we later learned was that this child had endured wicked abuse before Childhelp intervened. Zachary’s adoptive mother, the very person who should have loved him most and the only parent he had ever known had been physically and mentally abusing him for years.

Evidently, it wasn’t enough to deny the boy food. This woman would place Zachary in a hallway behind a metal gate and force him to watch the rest of the family eat their meals. It’s not an exaggeration to say that Zachary was tortured. But, thankfully, his story didn’t end there.

Because one concerned person recognized the signs of abuse and called a hotline; because investigators got involved and discovered the truth; and because Childhelp was there to fast-track intervention and treatment, Zachary didn’t become a statistic.

Zachary’s adoptive mother would eventually be convicted of child abuse and sent to prison. However, before that sentence could be handed down, Zachary needed a new home – one where he would be safe and could begin the healing process. Childhelp contacted Julie and Jim Morris, a couple who had been working with us as foster parents in the hopes of one day adopting a child. Once Zachary was well enough to leave the hospital, it was Julie and Jim who picked him up.

Thinking back to the first time they met Zachary, Julie recalls: “He pretty much just seemed to need a mom and that love and affection so much that he climbed right into my lap.”

In the weeks and months that followed, Childhelp was there every step of the way for Zachary and the Morris family. Our therapists knew they had a long road ahead, and the first two months of sessions revealed big challenges. Zachary didn’t talk much for several weeks. He was often afraid. He didn’t know whom he could trust. He didn’t know who was supposed to care for him or who loved him or liked him or who would hurt him. But six months into the healing process, he began to open up, and once he found his voice he didn’t stop talking.

Today, Zachary is one of the most gentle, kind-hearted, loving children you could ever meet. His new family is amazed at how much he has changed, noting that he mostly talks about sports, friends, and video games… “just normal kid stuff.”

“He’s very passionate about every day,” according to Julie. “And he’s so much fun because he’s just excited about everything.”

Zachary’s story proves just how much your investment in Childhelp matters in a child’s life. To learn more about Childhelp and how you can get involved, visit our website here.