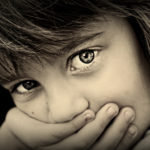 The impact of prevention education is far reaching and life changing. For Stephanie, a student of Speak Up Be Safe’s forerunner program, that impact not only helped stop ongoing sexual abuse by her father, but provided an early understanding that what was happening was not her fault, and help was available to her.

When she was a little girl her class took part in Good Touch/Bad Touch, a child abuse prevention program that would later become Childhelp Speak Up Be Safe.

I first heard “speak up be safe” at my school in Mesa, Arizona. I was in 2nd grade at the time and I was about 7 or 8 years old. The name of the school was Adams Elementary.

I have very vague memories of my childhood before or after that. I felt like I had a pretty normal life but there was something going on that I really didn’t understand. Childhelp Speak Up Be Safe, a program at my school helped me realize that I was being inappropriately touched by my [biological] dad. My mother worked 3rd shift and he would come into my room and touch me. When I saw the video at school it clicked right away that something was wrong. It was at that very moment that I knew what to do. As soon as the movie was over, I had to tell an adult that I trusted.

I remember telling my Girl Scout leader that something was happening with my dad. I don’t remember exactly what I told her, but I know I explained about the inappropriate behavior. And I don’t really remember her response except that she had a meeting with my parents. I wasn’t there when she met with them so I don’t know what she said or what they said. I imagine my dad talked his way out of it; he talked his way out of many things in his life. He was very manipulative.

I disclosed to an adult that I trusted, but nothing happened.

I disclosed again when I was 10 or 11 to my mom. She called the police and I sat through a forensic interview. My dad was taken into custody, but he didn’t stay in jail. My mom kept him out of the house for a while, but he talked his way back in. The police never followed through with the investigation, and shortly after, my dad moved us out Arizona and to Michigan. The police never came through.

The abuse continued on and off until I was 15 years old. I disclosed a third time. I told my mom again but she was not mentally or emotionally strong enough to leave him. He was physically, verbally, and mentally abusive to her and to one of my brothers their entire lives. My dad also molested my cousin. I was about 12 when this happened to her. She disclosed but didn’t want to testify in court so the charges were dropped. When I was about 13 or 14, my dad molested one of my friends. She disclosed at school, and the school called CPS (Child Protective Services). This all happened while we were still living in Michigan. CPS started an investigation, but my dad moved us back to Arizona abruptly and without telling anyone.

When we left Arizona the first time I was hurt and confused. I just kept thinking that I would soon be 18 and not have to live with him anymore. When we got back to Arizona, I didn’t think anything would happen but a few weeks into school and I was called to the office. There was a woman in a suit waiting for me. I knew right away she was from CPS. I just thought “ugh I wish this would all be over!” But it was this time that the law actually did something. Michigan CPS tracked me down after we moved so abruptly out of Michigan. My dad was arrested and authorities started talking to my mom. They tried putting both my 2 brothers and I in foster care, but I begged them not to. My mom was abused as much, if not more, than I was. She had been with my dad since they were both 15 years old. They had me at 15, my brother at 16, married at 16, and had my youngest brother at 29. My mom tried to leave him many times, but like most battered and abused women, she was unable. We always had food, clothing, shelter, and love from my mother. CPS allowed us to stay with her, but I was considered a Ward of the State and not allowed to leave the county. My dad’s family bailed him out of jail and he was told not to leave the state. Unfortunately, my dad basically did whatever he wanted while out on bail. He actually traveled by car across the U.S. from Arizona to Michigan, and then back toward Arizona. He stopped in New Mexico where his dad lived and ended up being turned in by my Grandpa for being out of the state on bond.

My dad was finally sentenced to 12 years in prison and lifetime probation. I requested the lifetime probation so that he would be watched more closely when released. I wanted to try and make sure he couldn’t hurt anyone else again.

My dad served his time and was released in August 2009. In 2012, my dad contacted me through Facebook Messenger and was harassing me. I called the police and filed a report. He was arrested in December 2012 for harassment, contacting the victim, and using the Internet – which is against the rules of his probation.

In January 2013, I received a birthday card from my dad from the prison! In this card, my dad was gloating over the fact that he got off easy with just 2.5 years and got off lifetime probation. He also stated that he had a girlfriend and she was pregnant. He stated “you’ll have a sister or brother.” I was disgusted and in disbelief! How could he “get Off” LIFETIME probation? Well, like I said, he is manipulative. He found a loop hole in the justice system. I’m not sure how, but he found out that since he served his full term the first time, if he re-offended, he would no longer have lifetime probation if he served more time.

Are you kidding? How could this be possible?

I called victim services right away. Apparently this was true because the laws back then allowed it. New laws regarding lifetime probation have since gone into effect. I was furious and told them about the card he sent and the things it said. They advised me to file a report with my local police department – which I did. They also investigated his sentence for these current charges. It was a good thing I called because I found out we were able to file an appeal … and we only had a couple days to do it. Victim services discovered that he was wrongly sentenced this time around. He was only given 2.5 years and it is a mandatory 5-10 for re-offenders of this type.

So we fought and WON! He was re-sentenced to 10 years!

Thankfully I learned at an early age that none of this was my fault. I’m not sure what it was about me that was able to live the way I did, but I’m sure hearing the message from Childhelp saved me! I also thank God I was able to keep a positive outlook on life through all of this. Yes, I had some very hard times and not the greatest childhood. But it could have been so much worse. I am living a full life; I am married with three kids; and I am a nurse and working at my dream job in the NICU (Neonatal Intensive Care Unit). We just bought our dream home in the country, and loving every minute of it.

I can’t imagine my life if I was still living in silence. I don’t think the abuse would have ever stopped. I also believe there are, and would be more victims of my father if he hadn’t finally gone to jail. I had gone to group therapy as a kid and saw a lot of girls that were unable to talk about their abuse and my heart broke for them. They were so lost and sad. I am thankful that I didn’t allow the abuse of my father control my life. My goal today is to help other girls see that the abuse does not define them. I want them to not let the abuser abuse them one more day… especially if the actual abuse is no longer happening. Don’t let them win your life. And most importantly, learn to forgive them. YES. Forgive them, because if you don’t, it will only hurt you. That doesn’t mean you have to like them or have them in your life, but let it go for your own health and wellness.

Stephanie is hopeful that more abuse can be prevented, and we’re glad to share her story. And we’re also glad to share her hope:“I hope they get these programs back in the schools all over, because sometimes school is the only place that kids have a safe place or a place outside their home, and if they can find this information out that something is wrong and it’s not right, and it can help them at a young age. So I really hope they implement these programs all over the whole country.”

Prev
Georgie’s Story
Next
Doing whatever it takes, for the love of a ch...