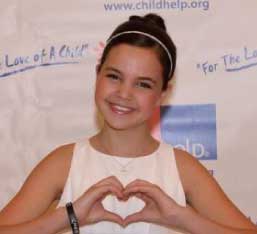 Bailee Madison is a child actress known for her feature film roles in Bridge to Terabithia, Don’t Be Afraid of the Dark, Just Go With It and Brothers and Conviction. She has been featured on numerous television series including Once Upon a Time, Law & Order: Special Victims Unit, Wizards of Waverly Place and several Nickelodeon productions. Bailee’s new film, Parental Guidance is due out in December.

As a Childhelp celebrity ambassador, Bailee co-hosted the Childhelp 2012 Wings Fashion Show Luncheon in Scottsdale, Arizona. Bailee is excited to continue supporting the work of Childhelp through future events and social awareness on Facebook.