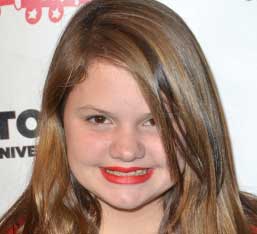 Savannah Robinson is a young singer/songwriter who was discovered on YouTube by Ellen Degeneres. After appearing on The Ellen Degeneres Show, she was immediately signed to Ellen’s record label, ElevenEleven. Savannah has since performed with Stevie Wonder, Justin Beiber, Jennifer Hudson and Katy Perry. She is currently recording her debut album, Believe with New Interscope/ElevenEleven which will be out toward the end of 2012.

Savannah is also one of Childhelp’s youngest Celebrity Ambassadors. She has performed in various concerts to raise awareness for Childhelp and was the featured performer at Childhelp’s 2012 Drive the Dream VIP cocktail reception in Scottsdale, Arizona. Savannah has also performed at Childhelp’s Merv Griffin Village holiday show in Beaumont, California.