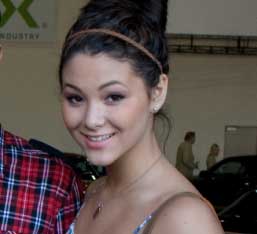 Fivel Stewart has worked in the entertainment industry since the age of seven. She is an actress, gifted singer, and two-time karate world champion. She has performed with the musical group My Allowance and is currently finishing a debut CD along side her siblings, Booboo and Meghan. She was recently in the independent film White Frog, and is currently in discussions with the HUB Network to develop a new TV show.

Fivel has been involved with Childhelp since 2011 and has joined forces with her brother, Booboo, to co-host numerous free concerts to support Childhelp in ending child abuse. Fivel uses her celebrity status through her website, Twitter and Facebook pages to help raise awarness about the work of Childhelp.