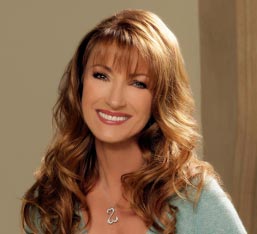 Jane Seymour British born, award-winning actress Jane Seymour has appeared on Broadway, in film, and on television in her Golden Globe-winning role as “Dr. Michaela Quinn” on Dr. Quinn, Medicine Woman, among many other roles.

Seymour’s past films include the James Bond movie Live and Let Die, the now cult classic Somewhere in Time, and the comedy smash hit Wedding Crashers. Her other television credits include an Emmy Award winning performance in Onassis: The Richest Man in the World, East of Eden, for which she won a Golden Globe, and the mini-series War and Remembrance. Jane has a star on the Hollywood Walk of Fame and was “Special Correspondent” for the Royal Wedding of Prince William and Kate Middleton. In Jane’s spare time, she was a celebrity contestant on Dancing with the Stars where she partnered with another Childhelp Celebrity Ambassador, Tony Dovolani.

Jane has been involved with Childhelp for more than 30 years and has received Childhelp’s Woman of the World award.