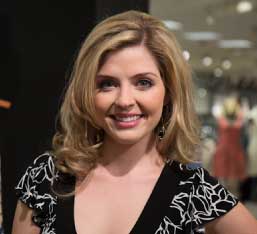 Jen Lilley is currently starring as a lead role in NBC’s Days of Our Lives and previously starred as Maxie Jones on ABC’s General Hospital. Her film credits include the Academy Award-winning movie, The Artist, The Back-up Bride and One Small Hitch. She has also guest starred on numerous television series including Criminal Minds, Two and a Half Men, Castle, Hannah Montana and Rules of Engagement.

Jen attended the Childhelp National Day of Hope luncheon in Washington, DC, and the Childhelp Wings Fashion Show in the spring of 2012 as a celebrity guest. Jen is instrumental in raising social awareness about child abuse through her Twitter account, and recently has raised funds for Childhelp through a social media birthday campaign, and Stars Strike Out Child Abuse, a celebrity bowling tournament.